Review: The Haunting of Sunshine Girl by Paige McKenzie 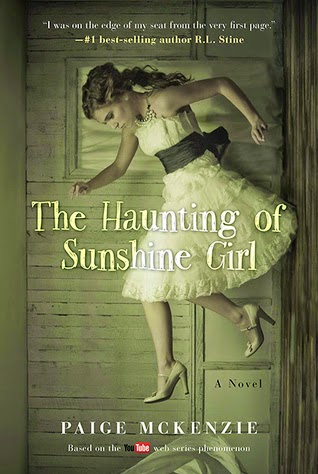 I have to thank Weinstein Books and Perseus Books for sending me an ARC of this title.  I didn't know anything about the YouTube Channel before I found out about this book.  I've always enjoyed a good ghost story, and when I was younger, I used to go to the library and check out all the "true haunting" books.  About 10 years ago I even went to a couple "real" haunted houses with my younger cousin and aunt and my mom.  One was a Bed and Breakfast, called the Mason House Inn that is located in Bentonsport, Iowa, where we went and had a paranormal expert named Christopher Moon give us lessons on how to try to catch evidence of ghosts, and even shared his own findings.  And we went up to a cemetery at night, and it was pretty spooky.  So anyway, when I heard about this book I was instantly interested based on the description.

The main character is Sunshine Griffith.  She and her mother have just moved from Texas to a small town in Washington state, and into what Sunshine calls a "creepy" house.  And she likes the word creepy.  She uses it to describe just about everything, the house, the street that really only seems to contain their house, and what is going on in the house.  Right away she gets a weird feeling in the house, and starts hearing sounds.  Footsteps on the 2nd floor, even though she figures out that the way it is carpeted up there, she shouldn't be able to hear any footsteps even if there was someone up there.  She also hears whispering, most of the time so quiet she can't tell what it is saying, but sometimes she can.  And a little girl's laugh too.  And anyone who watches scary movies knows just how creepy that sound can be.  Next things start being in different places than where she left them.  And then, one night she and her mom are both home and hear what sounds like a little girl yelling for help, and splashing noises.  They run upstairs to where the bathroom door has slammed shut, and water seems to be coming out as it seems the tub is overflowing.  But when the open the door, there isn't anyone in there.  The water is pretty gross though, as if the pipes were dirty, and it leaves a slimy coating on everything that touches it.  After they get it all cleaned up, it's as if her mom has lost all memory of what happened, as if it got scrubbed away as they cleaned.  And now that Sunshine should actually have her mom on her side, her mom acts almost angry when Sunshine brings it up.  Her mom begins to change as well, growing more distant.

Yes, she started a new school.  And she does make a friend pretty quickly.  You see Sunshine was really into photography at her old school, she even has a really fancy camera, and likes to develop the film herself.  When she signs up for the art class at her school, it is almost as if it was an afterthought.  All the students do all day is get stuff from a craft supply closet and make sculptures out of pipe cleaners and other similar things. The teacher is really weird and creepy.  Sunshine is fortunate enough that a nice boy sits across from her the first day.  Nolan talks to her and really becomes a good friend. When she finds out that his grandfather really used to be into paranormal things and that Nolan respected and paid a lot of attention to what his grandfather did, she feels able to share what is going on in her house.  And together, they start to investigate these strange events.  Together they will learn why Sunshine is seeing these things but now her mom isn't.

There is also someone that is an unknown narrator who chimes in every once in awhile.  And this person knows exactly what Sunshine is dealing with.  But they don't come forward and reveal themselves until the very end.

A great story.  The haunting is very well set up in the story, and I like the whole background story that we learn bit by bit throughout the book.  I'm guessing there will be a sequel, or a series you might say as the ending of the story leaves us.  I enjoyed it so much I had to go start looking through the YouTube channel:  The Haunting of Sunshine Girl Network.  I got through a few very short, like 1-2 minute videos tonight, and subscribed as well.  I'll be going back as I have time to watch on.  There are quite a few similar things in the video to the book so far, but it is different enough to be its own thing.
Posted by Lisa Mandina at 6:03 PM