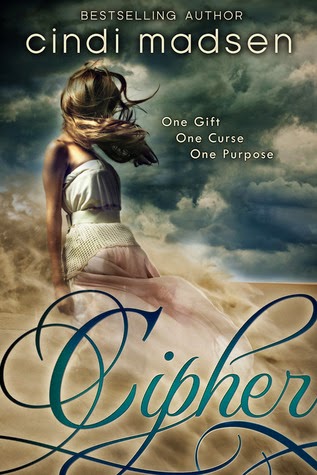 Thanks to The Book Machine and the author for letting me read an e-copy of this title.  I am very glad that I got a copy of it.  The blurb sounded pretty interesting, and once I started reading it, I loved it!

The title refers to a job that the main character finds out she has been selected to perform. The main character, Summer, can often tell how and when someone is going to die when she touches them.  Unfortunately she doesn't get a lot of warning. When she sees the vision, it means it is going to happen sometime within the day.  So she isn't given the vision to save them.  One day this really beautiful, but strange woman shows up in Summer's room and tells her that she is a Cipher, and that her job is to help people settle their affairs before they die.  This beautiful woman is an angel of death named Gabriella.  And she tells Summer that she's been assigned to help a girl at her school, a girl in the "reject" group, fix her relationship with her mother.  Summer isn't sure how to do this. First off, Summer's best friend is another cheerleader, and her boyfriend is the quarterback.  So the reject group isn't really on her list of friends.  When Summer first moved to this town though, her first friend was Troy, who seems to be friends with everyone in the school.  So she asks him to help her meet Ashlyn.  When she sits with the group at lunch, Ashlyn isn't very friendly.  She knows the type of girls that Summer hangs out with, and so doesn't trust her.

But Summer gets to know the "reject" group, who prefer to be called the misfits, and really gets to like them.  A lot more than the girls on the dance team with her and her former best friend Kendall.  And her boyfriend Cody is the kind of jerk guy that a lot of girls know.  He says he loves her, but pressures her to have sex, and even gives Summer an ultimatum. So now she has no boyfriend, and must try to help this girl she is just now getting to know repair a relationship with her mother.  A mother who you can tell cares about Ashlyn, she just shows it more by telling her to exercise and lose weight.  Never really giving any compliments to her other than for her grades and when she eats what she considers a healthy meal.  And Troy is confusing, she thinks she's interested, but can't tell if he is interested in her.  And the more she gets to know Ashlyn, the more she likes her, and knowing that she is going to die, well that sucks.  Summer's last real best friend, her mother, died, and she doesn't want to lose her new one.

While there is a lot going on in this story, and some of it may be kind of familiar, I think the idea behind it was pretty original.  And can I tell you how much I loved Ashlyn and Summer as friends?  I want to be friends with those two!  The silly sense of humor, all of it.  I have to say that I have no idea how in the world Summer stayed friends with Kendall, the popular cheerleader girl.  She had NO sense of humor!  At all!  I could not be around someone like that for very long.  I could be friends with them, but in no way best friends.  The boy that is the good one, Troy, well he was written very well.  The back and forth, does he or doesn't he bit worked well, in that it wasn't done in such an unbelievable way like is often done in these kinds of stories.  And when I finished and found out there was going to be a sequel?  I'm very glad about that, because I love the characters!

Go out and get ahold of this book as soon as you can, it was a great read!  Here is a link to Amazon where it is only 99 cents!
Posted by Lisa Mandina at 10:29 AM