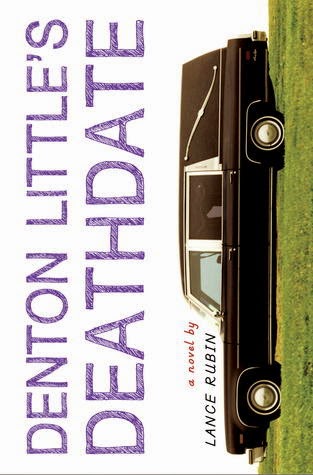 First, thanks to Netgalley and Random House Children's for allowing me to read an egalley of this.  I wasn't quite sure at first, but I went ahead and requested it on the off chance it would be really good.  And you know what?  It was hilarious!  This book made me actually laugh out loud in public places, on my lunch break at work, as well as while I was sitting in a Wendy's restaurant eating my dinner!  And before I give my review, I have to share what has to be one of the funniest conversations I've ever read in any book:

"I thought you were done being online." (Paolo)
"Yeah, but screw that.  I'm gonna die.  I just wanna check Facebook real quick." (Denton)

Seriously, I'm going to die, but I have to check Facebook first.  It still makes me laugh to read it.

So, the main character is Denton Little, as the title might give away.  And in this book, they have figured out a way to predict everyone's deathdate, the day they will die with a blood test/DNA test and some kind of risk assessment?  Yeah, it was a little too vague and unrealistic sounding to me, but that's okay, the story totally makes up for it! (It's probably just the former science teacher in me having problems with that, no one else probably will.)  So anyway, Denton's death date is just about to fall, and it's going to happen on the day of prom.  So our story takes place a day or two before and up to the day.  If you knew when you were going to die, what would you do?  Well, Denton has always wanted to just live a normal life.  We begin with him waking up on the day of his funeral, they now have those a day before the deathdate so you can see what everyone has to say about you, as well as giving your own goodbye speech.  The night before he'd gotten really drunk, so he doesn't remember exactly what happened, but he woke up in his best friend Paolo's sister Veronica's bed.  And he seems to have memories of her saying she was only doing this because she felt sorry for him.  And something about maybe breaking up with his girlfriend Taryn.  But when he talks to Taryn, it seems that she'd just said she didn't want to have sex with him in that condition (drunkenness).  But in his drunkenness, he did have his first time, with Veronica.

And lots of weird things happen.  His girlfriend's ex-boyfriend Phil seems to be hanging around a lot more.  Phil even goes to the extreme of suggesting that Taryn is just waiting till Denton dies to get back with him.  When Taryn and Denton go to their "spot" to finally get the deed over with, a cop pulls up and tells them they need to move along. The cop actually is Phil's grandpa, and besides that there is something creepy and weird about him.  The day of his funeral Denton also notices a weird bruising spot on his leg, that has these red dots that move around.  He figures maybe this is what will cause his death. Because even though he knows that he will die the next day, he's not sick or anything, so he doesn't know just how it will happen.  On the actual deathdate they have something called a Sitting.  Everyone sits around the house with the soon to be deceased and they just kind of hang out waiting for them to die.  I guess they'd decided on laws about not having those people on planes and such, so that other people wouldn't be in plane accidents or whatever. Because you could still go into a coma or be permanently paralyzed even if it wasn't your death date.

There's a weird spam email that keeps popping up, his mom's gynecologist shows up and wants to talk to him even though his stepmom won't let him.  He finds pictures of himself and his dad in his best friend Paolo's mom's file cabinet.  So there are some weird things going on, for awhile he thinks that maybe Paolo's mom might be his real mom, even though he was told his real mom died in child birth.  Which would make Veronica his sister. The parts where he thinks that are some of the funniest conversations in the book as well.  I won't give anything away, but I will say that Denton lives pretty much every moment till the very last moment of his deathdate.

There is mystery, romance, family stuff, and really great comedy in this book. I loved it so much!  I keep thinking about different parts of it and laughing in my head, or out loud at times!  I want to talk about it with other people so bad, but not sure if some of them will even read it, as they aren't big readers.  Aaah!  I don't know if I can say enough how much I love this book.  And I will have any books by this author on my top TBR list, read right away list, because no matter the topic, I'm guessing his characters will always have the best conversations and dialogue.
Posted by Lisa Mandina at 10:47 PM