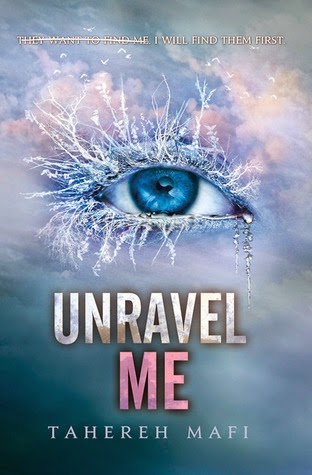 This is a book I ended up checking out last month when I found myself out and about with nothing to read, and I didn't want to go home and disturb the dogs just to get a book, so I went to the library.  Instead of just grabbing one book, I ended up leaving with like 9, including this one.  Now that I'm done though, I wish I'd left with the last book in the series, Ignite Me, as well.  But no worries, I'll be going to the library website to reserve it as soon as I'm done with this review.  I'd say that this is another book that I put off reading, even though I knew I wanted to, and now that I've read it, I'm mad for waiting for so long!  But it is one that I have a bit of an excuse for.  I had an ARC of the first one, and so had to wait so long for the next ones to come out, that I didn't get around to it, and it kind of fell to the back of my mind how much I loved the first one, Shatter Me, by the time it came out.  And of course, if you haven't read the first book yet, there will be some spoilers in this. Sorry about that.

So where we left off in the last book, Juliette, Adam, and Kenji have escaped from Warner and the soldiers.  And they have joined into the group at Omega Point.  People with powers, like what Juliette has.  We learn about what Kenji's power is, he is able to make himself blend into his surroundings like a chameleon.  And the leader, Castle is doing tests on Adam to try to figure out his possible power.  They know he must have something, as he is able to touch Juliette's bare skin without being killed, like anyone else would be.  Well, other than Warner, the only only other person who has been able to do that.  Juliette has trouble fitting in, and it is also causing her to have problems trying to figure out how to use her power, maybe to project it.  But after a few slip-ups, she finally is able to get a bit more into her testing.  But there are set backs. While Adam was always able to handle her touch, it seems he is not able to do it as well anymore, and one night when he and Juliette get really intimate, despite the warnings, he does get hurt, badly.  So now she agrees that she must stay away from him.  And you know that Warner will show up, and he does, and gets kidnapped after a huge blow up with his father and the Omega people.  Juliette has never told anyone about Warner being able to touch her, and of course he gives the secret away.  She still feels the attraction to him, even though she knows she should hate him.  While their leader, Castle, seems to think that he can convince Warner that he must have a power too, since he can touch Juliette, and that should mean he would be on their side, Warner is who he has always been.  It ends in another big fight with the bad guys and of course a bit of a cliffhanger.

The book did start off a bit slow for me, I was still in love with the characters' snark in the last book I read, Unmade, that at first I didn't get that with this book.  Adam and Juliette are perfectly dramatic lovers.  But to me, that made Adam kind of boring.  Then came more time with Kenji.  And boy did I love that boy!  He's not a love interest for Juliette, too young, but I still just loved him!  Warner's entrance into the story also grabbed me.  And I have to say that I'm now Team Warner.  He may be the bad guy, but I think he's the perfect one for Juliette. And the scene with the two towards the end, just wow, very hot and steamy!  So I am an even huger fan of the series now.  And hoping that it ends just as well as some other final books I've been reading this year.
Posted by Lisa Mandina at 4:26 PM

Email ThisBlogThis!Share to TwitterShare to FacebookShare to Pinterest
Labels: Library, September is for sequels challenge, Shatter Me, snark, Tahereh Mafi, Unravel Me