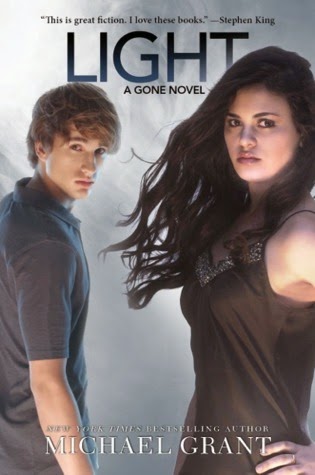 I actually got a copy of this through a trade on YA Book Exchange a while back.  And just didn't seem to get around to it till my September Sequel Challenge.  Which I'm so not going to meet my goal this year.  But, I must say that the sequels I did read this year, including this one, were all really good.  And this was another great ending to a favorite series of mine.  As I watch Under the Dome on tv, I think about how much better this series would be on tv.  At least in my opinion.

The end of all the kids' time in the FAYZ is almost over.  The gaiaphage is coming into its own, ready to break lose, and take over the world.  Little Pete, the one who created the dome is now fading away.  The kids have kind of revolted, and no one is working.  Partly because the dome has now become see through, and they can see their parents and the outside world, and all they want is to get out and go back to normal life.  It will take the most powerful, Sam, Caine, Breanna, Lana, and others to stop Gaia.  But not before she kills many of the kids.  There will be lots of death, and even of some who may have started out as the bad guys, but who had a redemption of some sort.  Orc who found God.  Albert who knew he was the only one to get the kids back working. Even Diana, the mother to the monster, will do what she must to try to save the others, including Caine, who she loves.  And some of the deaths will be beloved characters.  And then there will be some that are thought to be dead, that may survive and show up after everything is over.  The kids know that they will have to face authorities when they get out.  That people will want to punish them for what they don't understand.  And in the end, Sam will find out things from his mother that will really change his whole view on everything, including his brother Caine.

As I said, such a great ending to a great series. If you haven't started, you need to.  They have started putting them all out in new covers, which aren't bad, but I'm glad I was able to get them all with the same cover.   Now I must fit in my ARC of Messenger of Fear that I got at BEA.  And because I must share, here is my picture when I met Michael Grant this summer at BEA.  Let me just say how cool and personable he was!

Email ThisBlogThis!Share to TwitterShare to FacebookShare to Pinterest
Labels: ARC, BEA 2014, Gone series, Michael Grant, September is for sequels challenge, Under the Dome, YA Book Exchange