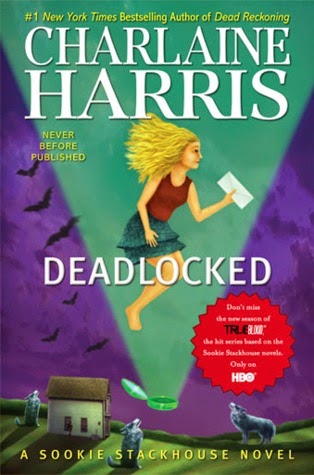 Well, it looks like I read the book right before this in the series last year during my September Sequel Challenge.  So seems appropriate that this one is now.  Don't know if I'll wait till next year to read the 13th and final book in the Sookie Stackhouse series.  I'll probably pick it up next summer when I'll be wishing there was one more season of True Blood.

What I love about these books is that I may have forgotten a little about what happened in the last book that I read a year ago, but I am easily pulled back into Sookie's life and the small town of Bon Temps.  Something I realized as I read this is that Sookie is really just like those detective characters in what you'd call a cozy mystery.  And I know the author does write mystery books as well.

In this next to last story, Sookie and Eric's relationship is a bit strained.  Partly because the King Felipe has come to see them, and is asking about his man Victor.  Yes, Sookie and Eric are responsible for Victor and his men's deaths, and yes Felipe wanted that, but they cannot let there be any proof of it, because the King will have to do something about it.  The story starts out with several problems, first when Sookie goes to visit Eric while he is entertaining the King, she walks in to find him in a room feeding on some random woman.  The woman is part were, and also may have drunk or injected herself with fairy blood to make herself irresistible to Eric.  When she is made to leave, not long after she is found dead on the lawn, something the vampires are unable to hide because the police are called before they can make the problem disappear.  Also, Sam's girlfriend Jannalyn seems to have it out for Sookie.  So she is dealing with that.  Then there are problems with the fairies that have been left behind when her great grandfather Niall closed the door to their homeland.  They want to go home, and some, the elves, need to feed to relieve their stress.  All of it will end up being tied together at the end, very neatly this time, unlike some of the books in the series that I remember.

There are also good things happening, Sookie's brother Jason proposes to his girlfriend, Tara has her twins, and those are just a few good things.  I have to admit that I do see the actors from the tv show when I read the book, and I hear Sookie talk in Anna Paquin's voice.  So while I am going to miss the show, since it was so different from the books by this season, it is okay.  Another good read.  Now I'm anxious to read the last book, even with all the things I've heard from people who were unhappy about things in it.
Posted by Lisa Mandina at 8:00 AM