Review: The Mark of the Hummingbird by Jessica Gollub 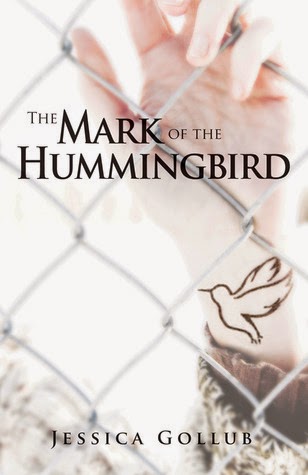 So I just read this book because tomorrow I'll be hosting the author on my stop of the Debut Authors Bash for this year.  I decided I'd just purchase the e-book myself to read before my stop.  And I'm not disappointed at all.  The Mark of the Hummingbird is a dystopian story.  And it is one that doesn't hold back any punches to what would be really horrible things to happen, but to me, probably pretty realistic.

Our main character is Leona.  All she has ever known is a life in a cave, which used to be a prison.  The reason she and all her family and friends live here is because the Earth has frozen over.  As we learn later in the story, one day, a July day, it started snowing.  And the temperature dropped, over 50 degrees below zero, even after it seemed the snow was stopping.  And things didn't change or get any better.  In fact, at almost 17 years old, they've only just begun having anything closely resembling a summer, when snow melts, and it gets halfway survivable outside.  Leona has lived with her father in this community, started by a leader everyone calls the Shepherd.  Her mother died when she was very young, and so she's only ever had her father.  One of the issues in the world before all this happened was that women had the choice, and often chose for their own children, to be come sterile.  In order to save themselves or their daughters from rape or kidnapping.  Leona's best friend Harlow is also turning 17, just a short time before Leona.  And at that age they all get the serum that makes them fertile.  And they are then married usually.  Harlow is lucky enough to get to marry the man she has loved since they were both young.  Leona has no one she loves like that, and so figures she will not have to get married.  But when Harlow gets her serum, soon after she changes.  She becomes kind of out of it.  Things that were normal for her, now don't happen.  Even her husband, Rowan, has noticed the change.  When it is time for Leona to get her serum, she finds out that there may be something else to the serum besides the fertility treatment.  And it is this that makes her decide to leave, to run away and find somewhere else to live.  She is sure there must be other survivors out there.

Unfortunately it is still winter, and Leona makes several mistakes, not only in what she packs to take with her, but in her trying to survive out in the wild.  At one point she sees a white wolf and even thinks that she might be followed.  Following a fire that she accidentally sets that burns up everything she brought with her, she decides to  try to make it back to the caves, that maybe things weren't as bad as she made them out to be.  She decides to take a shortcut across a frozen lake, and of course it cracks and she falls in.  She is saved, and taken to a community of survivors.  All women it seems.  Except for the man's tent that she is thrown into once she begins to heal.

I won't go on, but to say there are people in this camp that will connect back to the story of the people back in the Shepherd's community in the caves.  Families and friends will be reunited, even as some of them will not make it through other things.  I loved all the connections and how they all seemed to circle back around perfectly.  There were parts told from other characters' points of view, and they weren't confusing because it was labeled at the beginning of that chapter that it was that person we were following.  And the story does pretty much end satisfactorily.  While I see there is a second book, it seems to be a companion book, another character mentioned in this book that I want to know more about.

If this sounds good to you, I will be giving away a Kindle copy of both this and it's companion book, The Song of the Sisters as part of my Debut Authors post tomorrow.  So be sure to check back tomorrow to enter the giveaway, as well as to read my interview with the author.
Posted by Lisa Mandina at 8:00 PM

Email ThisBlogThis!Share to TwitterShare to FacebookShare to Pinterest
Labels: 2014 Debut Authors Bash, dystopian, e-book, Jessica Gollub, Kindle, The Mark of the Hummingbird, The Song of the Sisters