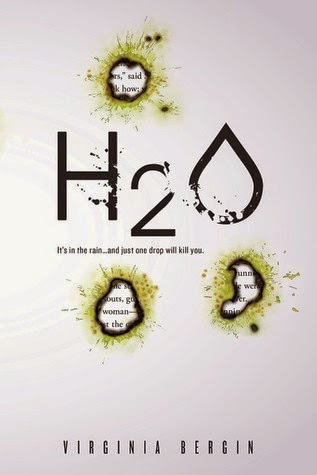 I have to first say thanks to Sourcebooks Fire for allowing me to read an e-galley of this. I even was approved on both Netgalley and Edelweiss.  I guess I didn't realize that I'd asked at both sites, but I did.  And I'm glad I did, because I really enjoyed it.

The main character, our narrator, is Ruby.  I guess you could call Ruby one of the "popular" kids.  And Ruby is at a party, kissing her crush, Caspar, in a hot tub.  They're at her friend Zak's house, kind of a farmhouse out in the country, in England. Zak's parents are pretty cool, kind of hippies, as they've left the kids out there for their party, allowed them to have alcohol, and then don't bug them about it.  But on this night, while Ruby is in the hot tub in her underwear kissing Caspar, Zak's parents come running out and usher them all inside, no time to grab their belongings out of the barn or get dressed.  There's a rainstorm coming.  But it's in England, so big whoop, right?  Well it turns out that one of Zak's father's friends has given him a heads up about this rain.  You see, a long time ago, when Ruby was a very young girl, there was a giant asteroid heading towards Earth.  The scientists were able to completely destroy it before it hit the Earth.  But because Ruby and her friends don't really remember that, it's never been that big of a deal to them.  Until this night.  When it turns out that inside that asteroid, there had been a type of bacteria that was able to live in extreme conditions, like the ones that live at the bottom of the ocean near thermal vents.  So it survived in space, and it survived in the dust and rocks that did come through the Earth's atmosphere, and now it was in the rain that was coming.

Everyone is kind of thinking the parents are being a little overprotective with making them all stay inside.  Even with the stuff that is getting broadcast on the radio.  So Caspar sneaks outside to grab his ipod and cell phone when no one but Ruby is looking.  But when he comes in, he doesn't seem to be feeling well.  He starts coughing, and soon is scratching his skin and bleeding.  Zak's dad says it isn't safe to leave, even though Zak's mom says they have to get Caspar to the hospital for help.  Everyone else is having tea and coffee to try to sober up from all the alcohol they've had.  Zak's mom wraps Caspar up to try not to touch him, and runs him to the car.  Ruby runs out with them to go to the hospital she thinks.  But Caspar dies on the way, and it seems that now Zak's mom might be sick from having touched him.  So she drops Ruby off at her own house, and she runs up, but under an umbrella to stay out of the rain.  But when Ruby gets to the front door, her stepdad Simon won't let her in at first.  He knows what is going on, and is trying to protect himself, as well as Ruby's mother and baby brother. Eventually he lets her in, but sticks her in the den, locks her in.  The rain keeps coming, and a neighbor even comes and knocks on the door asking for help, but Simon refuses to let her in, again to keep his family safe.  Ruby's mom throws some pain reliever stuff out the window to the neighbor.  Which may in itself be a fatal mistake.  When Ruby wakes up in the morning, the whole world will have changed.  She will have to survive with her family, and maybe eventually on her own when she tries to go find her read dad in London.  And more is learned as she tries to live without water, Simon is smart enough to know that the tap water is going to be contaminated, and that probably saves their lives.  But besides the water with the killer bacteria, there will also be people that are dangerous out there.

This was a very good story, told from the beginning of the "apocalypse" or "plague," whatever you want to call this.  Ruby's narration is a fun one, definitely like I would think a teen would talk/write.  I love that the science in this is mostly realistic. Although I really doubt that something that affected humans the way this does, wouldn't also affect the animals around as well.  But that's just my thought.  I really was kept involved in the story the whole way through.  It was hard to put it down because it was so minute by minute, and I didn't know exactly what would happen.  Would they get to where the army was and everything would be okay?  Or would it be like the camps I'd read about in other apocalyptic books like Ashfall by Mike Mullin?  I had to know how it would end.  And I'm not sure how I feel about the ending though.  I almost want more, but I can see why it ended that way.  So a good, edge of your seat read, for anyone who enjoys apocalyptic YA novels.
Posted by Lisa Mandina at 10:36 AM