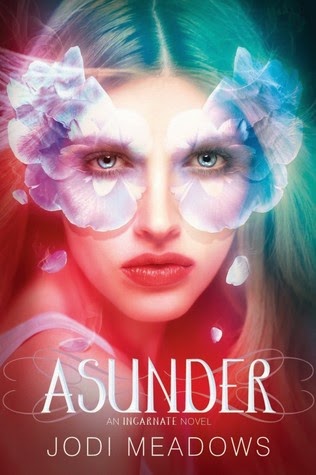 FINALLY!!!  I feel like it took forever to get through this book.  And not because it was hard to read, but because I just never seemed to have time to read.  I remember that I really enjoyed the first book, Incarnate, but once again, it just seemed to take me forever to get around to reading it.  And just like with the first one, what a beautiful cover, and again, there are some hints on the cover about bits and pieces of the story.  Now it did take me a bit to get back into it, being as it had been over 2 years since I'd read the first one as an e-galley.  And of course, since it is a second book, my synopsis will include some spoilery things.

The end of the first story we had left off after a major tragedy, Menehem had caused a problem that made many of the people lose their chance to be reincarnated by allowing Newsouls, like Ana, to have the chance to be born.  Ana is still fighting the prejudice of those who think she is an abomination and who hate for whoever's place she took.  Ana is still with Sam, although he is still taking it really slow.  While he is 5000 years old from all the reincarnating, she is only the exact number of years she actually is, 18.  So everyone tells them it is wrong for them to do anything.  So all they do is kiss.  But she is really enjoying the music that she makes with Sam.  We also begin the story with Sam and Ana taking a trip out to Menehem's lab, to try to figure out what he had been doing.  They haven't told anyone that is what they are doing.  People already don't trust her, and knowing that she has his journals will only make her look as if she knew what he was doing all along.  They meet another old soul, Cris, who was the creator of the blue roses around where Ana grew up.  It seems that Cris may have been another person who was once in a relationship with Sam in a past life or two.  The more Ana finds out though, the more she realizes that what Janus has in store for even the old souls isn't going to be so great, and it definitely isn't good for the Newsouls.  And as two babies are born as Newsouls, the townspeople of Heart grow restless and begin causing trouble.  Destroying all of Sam's instruments that he'd spent thousands of years worth of lifetimes on.  They blow up the houses of those pregnant, to try to prevent any more Newsouls from being born.  And they push Ana, along with some other friends into the temple, and take the key so that they will be stuck in there.

Ana must try to convince the townspeople that what is happening is bad, she must try to fight the fact that Janus has made certain memories fade so much quicker, the memories that keep them in the dark about what is really going on.  And we find out Sam, and all of them, may not be as innocent in all of Janus's plans as they would seem to be.

By the end I was back into the whole story, and now eager to read on and see what will happen next.  I won this book in some contest a while back.  But it was before I started doing Stacking the Shelves on a regular basis, as well as I now put little post it notes in the books I win, so that I remember who to thank.  A great 2nd book, now I must get ahold of the 3rd and finish it all up. Since I don't own the first one, because I read it as an e-galley, I will be donating my copy of this 2nd book to the high school library where I work.  We have the first one that I ordered last year, and this way I won't have to spend library money on the 2nd one, just will probably go back and order the 3rd one.
Posted by Lisa Mandina at 4:58 PM