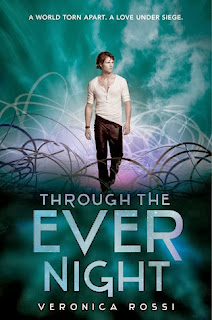 I enjoyed this series when I got to read the first one, Under the Never Sky, as an e-galley, almost exactly 2 years ago.  Not sure if I wasn't able to get this 2nd book as an e-galley or what happened, but I was able to get the 3rd one as an e-galley.  So I had to go to the library to check out this second book to get ready for reading the 3rd e-galley.  Is that confusing?  I don't know, but it's what is going on.  I feel like having read the little e-novella, Roar and Liv, as part of my November is for Novellas challenge, really got me back into the mood and ready to jump back into this world.
In this 2nd book we start back with Perry at the Tides.  As the leader he is finding it not to be that easy.  There are those that still question him.  And when it comes to Aria, a Dweller, coming back into his life, even his loyal men caution him not to let the people know of their relationship.  Aria is back for many reasons.  Of course she is so happy to see Perry, but she agrees and understands that they must keep their relationship neutral in front of his tribe.  But she also wants to help get Perry's nephew Talon back from the Realm she came from.  And to do this, she has made a deal with the father of her friend Soren from the first book.  The very man who kicked her out of her Pod after the fire.  To keep her end of the bargain, she is to help him find where the Still Blue is. This is supposedly a land where the Aether that makes living outside the pods almost impossible.  Something Perry's people as well as other outsiders have had to learn to live with when they were not allowed into the Pods or else chose not to go.  As the Aether storms are getting worse, Perry knows he must do something for his people.  He wants to go with Aria to find the Still Blue.  And there is someone who supposedly knows where it is.  Sable, the man that Perry's brother traded his sister Liv to.  As far as we knew before this though, Liv had taken off, and never made it to Sable.  We learn that she is there though.  Aria and Roar leave to go find Sable and Liv.  Back at the Tides, Perry realizes that the compound isn't going to keep them as safe as possible from the storms.  And so he finds a cave down by the beach, a large cave that he feels the whole tribe can fit in comfortable and live safely.  At least until something else can be done.  Because now they are running out of food as their farmland is destroyed by the storms.  And other tribes try to attack and take over when they hear of the dissension and problems for the Tides.  Shortly after Aria and Roar leave, a woman named Kirra shows up with food and supplies.  She says that she is from Sable and he is sending the rest of the deal for Liv, who he will be marrying.  There is also the boy Cinder that may have something to do with the Aether, or maybe some kind of power for dealing with it.  I would have to say that as with the last few 2nd books I've read, this one isn't a disappointing one that is just bridging the gap.  So much happens in this one.  Yes, we learn a lot more information that will help us to finish the story, but we don't just learn it with people sitting around talking.  Things are happening, people die.  It's an emotional story.  Really another good story.  And while it is kind of a cliffhanger, it does have what could be an ending.  We can stop here, but we won't, and that is good.  Because we will need to know what happens with all the different players in the story.  And it has left off in a way that we will be able to see Perry and Aria and Roar do some planning to try to make things work out for themselves, their family, friends, and tribes.  And I look forward to seeing how it ends in the 3rd book.  Although now I need to go download the 2.5 novella Brooke before I think.  I'm hoping that Brooke will find love, and maybe with one of Aria's friends from the Pod.  Soren maybe?  That's my guess and kind of a hope I have.
Posted by Lisa Mandina at 7:40 PM

Email ThisBlogThis!Share to TwitterShare to FacebookShare to Pinterest
Labels: 2nd book in a series, e-galley, e-novella, Through the Ever Night, Under the Never Sky, Veronica Rossi