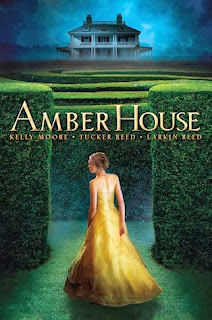 This is an ARC I got back when I attended BEA in 2012.  It had been just sitting on my TBR pile until I saw that there was a sequel available on Netgalley.  Then I decided I'd better go ahead and read it so that I could request the sequel.  I got this ARC by requesting it at a booth because it sounded good.  I'm not quite as bold as a lot of other people were at BEA.  I didn't just go up and grab things.  I always felt like I needed to make sure it was okay. Especially after one booth I went to and started to take something, only to be informed the stuff in that booth was only for display.  As many awesome authors that I got to meet, and cool books that I got, I did have a few negative experiences at BEA like that.  So I was kind of a bit timid about just taking things like lots of other people did.  This coming summer I'll be more prepared, and hopefully know better what to do.
Anyway, this was a ghost story, and it was definitely a very interesting one.  In a way it wasn't necessarily ghosts, but almost time travel.  The main character was Sarah Parsons.  She has come to Amber House because her grandmother has passed away, and so there is the funeral, and then getting the house ready to be sold.  Only this is a special house.  It has been in the family for years, and it has quite the history.  A history that Sarah seems to be seeing whenever she touches certain objects within the home.  Turns out that her ability may be something that has been shared with others in her family line.  And often the "ghosts" she sees are even seeing her.  She meets a boy named Jackson, whose grandmother had taken care of her grandmother and the house for a long time.  Sarah's relationship with her mother is kind of strained, not to mention the relationship between her mother and father.  This is made even more clear when an old "friend" of her mother's, a Senator, seems to be even more friendly.  The Senator has a son Sarah's age named Richard.  And her mother is encouraging a flirtation between them, even putting them in situations that Sarah feels really awkward in, until it seems maybe Richard is really interested.  But there is something about Jackson as well, they do have a distant relative in common, and maybe more as the book goes on.  Sarah's younger brother Sammy is autistic, but Sarah doesn't mind.  She is very happy to take care of him and be the sister he needs.
There is a mystery around the house, is it haunted?  Or as Jackson tells Sarah, is there a treasure there from a past inhabitant?  And all of this leads up to a big birthday party for Sarah, that her mother decides to throw in order to kind of show off the house and attract buyers.  But the longer they are there, the more connection Sarah feels to the house and her ancestors.  And so it gets harder and harder to think about losing the house.  Something happens at the end, I won't say what, but it is a bit confusing, and I'm not quite sure if it is what I think happened.  So now I'm glad for the sequel, to see what really happened, and what will happen next.
I have to say this was a very original story, to me anyway.  A very detailed ghost story, with a background that leads up to, and only enriches the whole plot.  I definitely recommend this for an interesting read if you like ghost stories with a bit of a mystery aspect to them.
Posted by Lisa Mandina at 9:27 AM