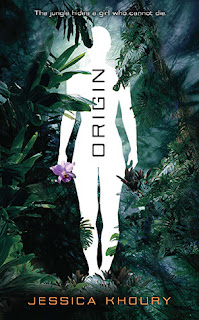 I've had this book sitting on my TBR pile for quite awhile now.  I picked it up off the table where my bookstore puts ARCs for us to look at and read.  I haven't received as many ARCs from the bookstore anymore due to one of the Children's leads now reading them and taking them.  :-(  Oh well.  I finally got around to this when I saw a sequel available as an e-galley on Edelweiss.
I'd seen many reviews of this, one even talking about a kitten being killed, and that almost made me not want to read it.  I'm not a huge cat fan, allergies, so I'm more of a dog fan.  But I can't stand to see animals get hurt.  But I went ahead and read the book, knowing that would be happening.
If you haven't read this yet, it was a quick read.  Definitely one that caught my attention and kept the pages turning.  The main character of the book is Pia.  She is immortal, and "perfect" according to all the people at the lab where she lives in the middle of a rainforest.  Pia has been educated about just about everything.  She can walk past plants and animals and tell you everything about them, clear from Kingdom all the way to genus and species.  One thing she knows nothing about though is the rest of the world.  She's never been outside of what they call Little Cam.  She has been taught only what she needs to know to join the scientists and the Immortis team.  And now she is being tested to see if she can be one of them.  The tests are some horrible things at times, like the test with the kitten.  Her mother does live there, but has never really been motherly to her.  Her father is there, but because of how things work there, she calls him Uncle.  She calls everyone there either Aunt or Uncle.  She was made through 5 generations of the Immoris serum being given in small amounts.  Any more than was given and it would be deadly.  What she wants more than anything is to have more people like herself.  And so Pia's goal is to get on the team and discover a quicker way to create more immortals, so that she doesn't have to wait 5 generations for a mate or others like herself.  All of this comes from a very rare flower that is impossible to move and replant anywhere other than where it grows.  Which is nearby and why the lab is where it is.  Pia begins to get a bit more curious about the outside world, especially as her birthday approaches.  The whole compound has chosen to celebrate with a party like she has begged for.  And right about this same time, a new female scientist shows up.  She gives Pia a map of the world, and talks about things that she's not supposed to, which also leads to Pia becoming more interested about the outside world and all that she doesn't know.  When a storm goes through, and leaves a hole in the fence, Pia takes the chance and sneaks out.  She finds a boy named Eio, and through him, a small tribe, and learns more about both herself, and the studies going on at her lab.
A lot of interesting twists in the story, and with the way it ended, I'm not quite sure how there will be a sequel, other than how we were told about the main corporation that sponsored the lab having secret labs like this all over the world.  I can't wait to read on, and the kitten killing part is sad, but not anything that I think was done in a way that made it more than an important point in the story.
Posted by Lisa Mandina at 8:52 AM