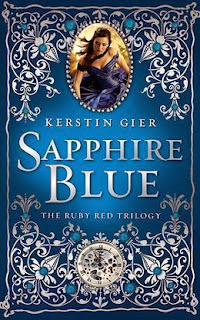 Okay, I am officially in love with this series, and hoping this author has books other than this series that I can read!!!  I love the characters in this book.  And at first I thought one of the newer ones was really going to annoy me, a ghost gargoyle, or demon as he says he is.  But I grew to love him and couldn't wait until he would show up.  Truly it was a great way for the author to let us know what was happening when our main character wasn't around, or was back in a different time period.  You can read my review of the first book in the series here:  Ruby Red.  This second book I had to check out from the library.
We have the romantic interest of Gideon again, and he's just as off and on as the first book, if not even more so!  In fact, he reminds me of the line in Twilight that Bella says to Edward, "Your mood swings are kinda giving me whiplash."  I'd have to say though that it is almost even more pronounced in this story.  So much that you really feel sorry for Gwyneth.  Although I even began to believe it might be true from the way certain things happened. Even from things that Gideon said.  But then, the whole reveal that he had to get her to like him as part of a plan to figure out if she was the one sabotaging all the missions happens.  And this is not something new.  It happens in lots of stories like these.  But I feel that like in those other stories, even though it may have started out that way, Gideon is probably now in love for real.
In this sequel, Gideon and Gwyneth must go back into the 1700's for a soiree, and also to meet with the Count that seems so evil, but is the one who started all this.  Gwyneth also meets her grandpa back in the past, which she loves because in the present he has passed away, and she really loved him.  But getting to know him in the past, even to try to figure out why Lucy would have done what she did, well it only leads to Gideon thinking she must really be the traitor.  Another new character in this book is Gideon's younger brother Raphael, and he is one that I think I like right away as well.  He's much more upbeat than Gideon often seems to be, and quite sarcastic, which I like.  Gwyneth and her friend are really starting to figure out the whole mystery, and with the help of Raphael, there is a big reveal that we won't get to know until the 3rd book.
I'm so glad I have the 3rd book already, as I can't wait to go on!!!!  I was going to start reading Unhinged next, but as eager as I am to read that, I am going to have to finish this trilogy first.  They're long books, over 300 pages, but they're the kind I can barely put down once I pick up.  The kind that make me want to do nothing but read.  This is also a series where the 2nd book doesn't disappoint at all.  Hoping the 3rd and final will be that way as well!
Posted by Lisa Mandina at 7:06 PM