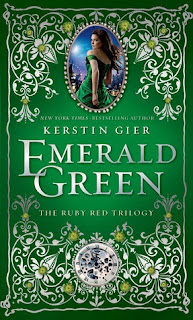 I have to thank Henry Holt and Company for sending me an ARC of this, I believe through a link in the Shelf Awareness e-newsletter.  It also says on the back this is supposed to be part of the Fierce Reads campaign, which as you've seen earlier, is something I really love!  I don't think it is possible to say how much I love this series!  Even with all the time travel issues I mentioned in the first book's review, it worked in the end for me.  While many things didn't quite end up being explained, they were left in a way that sufficed for me.  And I loved that although I guessed who Lucy and Paul really were pretty quickly, and that once that huge revelation was out, it wasn't as if that was the end of the story.  There was still more to go.  And it was also not turned into a problem for Gideon and Gwyneth.
We were left at the end of the last book with Gideon's declaration of love to Gwyneth being questioned due to what both the Count said to her, as well as the way Gideon reacted to her questioning him about it.  And there are more clues left in this book, helping Gwyneth and her friend Lesley to figure out why Paul and Lucy took off with the chronograph.  And some of these clues will tell them just where the original chronograph is hidden.  There is help from Gwyneth's grandfather, as well as their house servant, Mr. Bernard.  Yet cousin Charlotte figures out something is going on, and leads the Guardians to supposedly discover what she says Gwyneth is hiding.  But when it isn't found, Charlotte looks like a fool, and begins to rebel.  We still have Raphael, Gideon's younger brother around, and he and Lesley seem to get along quite well, although she tries to be free of him, afraid he will break her heart like Gideon has done to Gwyneth.  At the beginning that is.  But now the Guardians know they must go back in time to try to help figure out who the traitor is.  And when they do find out, it is a dangerous situation.  Deadly, at least thought to be.  But once Gideon and Gwyneth come back, they find it is not quite so deadly, and that what may help the count now, is if Gwyneth would give up her life for love.  Kill herself to save Gideon.
I won't tell you much more, except to say that again I love the gargoyle ghost/demon, Xemerius, and the ending is a pretty happy one.  The family issues get resolved, and even the school problems.  Such a great story.  I will for sure be buying it for my school library with my next budget.  I will also be highly recommending it at the bookstore where I work, as well as with my friends.  If you haven't read this series, I recommend it for the great story, the great romance, the laughs, all of it.
Posted by Lisa Mandina at 10:00 AM