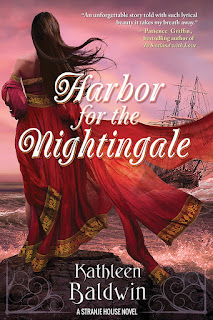 
"Baldwin has a winning series here: her characters are intriguing and fully rendered." --Booklist, on Refuge for Masterminds


It's 1814. In this alternate history, Napoleon has forced Europe to its knees, and now he plots to seize control of Britain.


Maya brings the mystery of India with her...


With her friends' lives in deadly peril, Miss Maya Barrington, one of Miss Stranje's unusual girls, must serve as a double agent. To do so, she gains entry into Napoleon's duplicitous game on the arm of the enigmatic Lord Kinsworth. She can read almost everyone; not so with this young rascal. Quick with a jest and armed with lethal charm, Kinsworth remains just beyond her reach. Can she trust him?


With Britain's future at risk and those she loves in deadly peril, Maya questions everything she thought she understood about life, love, and loyalty.


Fans of genre-blending, romance, and action will love this speculative history Regency-era novel filled with spunky heroines, handsome young lords, and dastardly villains--fourth in the Stranje House series. Don't miss the first three books: A School for Unusual Girls, Exile for Dreamers, and Refuge for Masterminds


"An outstanding alternative history series entry and a must-have for teen libraries." --School Library Journal on Refuge for Masterminds


"This alternative history series will appeal to fans of Gail Carriger's works and The Cecelia and Kate novels by Patricia C. Wrede and Caroline Stevermer." --School Library Journal on A School for Unusual Girls
Book Blogger Aggregate