Check out my stop on the Crimival: Carousel Crimes by R.L. Walker blog tour! 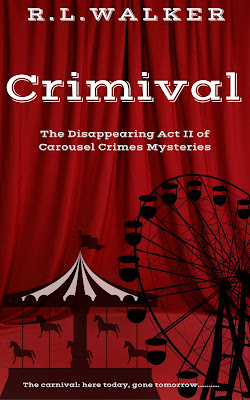 Zoe is back for another summer of adventure. This time she is trying her hand at running her own business selling her idea of deep-fried soda pop. She quickly learns the ups and downs of starting a business and that she needs to balance her crime-solving with her day job. This time things could get deadly when the rides start falling apart literally. Will her telepathic powers be strong enough to stop disaster before it strikes? 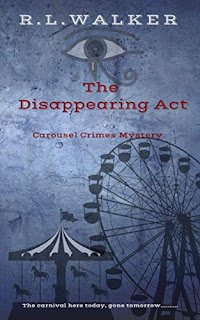 Zoe has once chance to accept her fate and save her friends. Failure is not an option.
The summer starts off as a normal carnival season for Zoe who has grown up in the carnival. Soon she realizes it's everything, but normal. Friends are disappearing and Zoe begins to notice she has an ability to see what is happening to her. Will she be able to learn to use her newfound telepathic powers to save her friends from a madman before the summer is over?

Come for the carnival, stay for the story....

Spotting this ad online literally saved my life. WANTED: RIDE JOCKEY TO START WITH KAVANAUGH AMUSEMENTS IN GIBSONTON, THEN FINISH SEASON IN OHIO. This was my fresh start away from all the trouble I got into in New Mexico. My uncle was gone and I could reunite with my sister. Plus no way anyone would find me in a traveling carnival. I would have to forget Kai and move on with life. I called the phone number on the ad and lucky for me they told me to go to their Florida office for a final interview and wanted to know if I would be okay with a traveling lifestyle. Little did they know if fit with my plans perfectly. Hopefully, I would be able to turn over a new leaf and life.
~~~~~~
Whistling as I walked back holding my new I.D. card for Kavanaugh Amusements, I knew this summer was going to be much better than the last. With a bounce in my step, I headed towards the dining area for a nice hot meal before I began my first day on my new job. That is when I smelled a funny smell and a bag went over my head before my world went black.
I awoke to whispers and noticed that my hands were bound behind my back. I seemed to be inside a truck trailer with bad lighting. “He’s awake, boss.” I heard someone growl out the side door. In walked a rather large scruffy overweight man. He was missing a front tooth. Now I was worried, this was supposed to be my big break, not my meeting with some crazed Ted Bundy serial killer type. Maybe this was karma for messing around with those sacred artifacts this past summer. I tried to atone for that by getting my uncle out of the picture, but that mostly helped me. So perhaps this was karma, yet it still didn’t feel quite fair.
Snaggletooth lumbered over towards me and held up a newspaper clipping that showed my face and had the whole story from last summer. My eyes widened and I realized that this was going in another direction, but it still was not good. “Excellent, I have your attention,” grumbled the rather gross looking man. The few teeth he had were tobacco stained, and he had his previous meal still stuck in parts of his beard. Briefly, I wondered if this man worked for my uncle or perhaps was a henchman for Kavanaugh.
“Would you like me to show this to your new employer?” he asked with a sneer that said he was rather enjoying himself. “
Don’t! What do you want? I just want to start over, I promise all my bad decisions are behind me and I will work hard.”
A maniacal laugh escapes him, “I hope that all of your bad decisions are not behind you. If you want this to be kept our little secret, then you will do exactly what I say when I say it. I own you now.”
“How did you find that clipping? I will do whatever you want, I swear,” my voice squeaking in despair.
“I have my ways. I make it my business to know everything about everyone. Let’s just say it keeps me in business. I knew you looked familiar so I had my crew run a check on you, and it turns out you have a special set of skills that could be useful to me,” he whispered.
I felt a chill run down my spine and knew that whatever he wanted would not be a good thing, but what choice did I have. He could probably turn me over to the F.B.I. if he wanted. I was not going to tell him that. Perhaps, I could make it look like I was going along with his plan while trying to make my own escape and disappear for good this time.
“Oh and tell your sister she has a special role to play as well. It turns out that my enemy has a telepath on their side, so I need one as well,” he explained while slowly turning his knife and using it to clean under his fingernails. Not that it was helping at all.
Sadly, I knew there was no escape now. He knew my even bigger secret, my sister. “Yes, sure. Whatever it is that you want me to do, I am your man.”
“I knew that I could count on you, don’t make me regret it. I will send along a set of instructions here shortly,” he stated before exiting the trailer.
With that final click of the door, I knew my fate was sealed. I only could hope that I had gotten myself into an even stickier situation. A skinny guy with a neck tattoo passed me a piece of paper with my first set of instructions. I felt the rage boil up inside of me and I crumpled up the paper and was able to leave under my own accord. They knew that they had me where they wanted me.

About the Author
I grew up in the carnival which was the family business, after graduating I went to college. After which I got a job teaching English in South Korea which compelled me to pursue my Masters in Education upon my return. I have been teaching English ever since.

Last year to help inspire my students to write more, I told them that I would write with them and complete a story and publish it. It took me all year, but I completed my first book, "The Disappearing Act" by the end of the year and got hooked on story telling! My time in the carnival business inspired my first book and my time spent at an archaeological dig helped to inspire my second book, "Kai's Secret".