Check out my stop on the Resurrection Girls and enter to win a copy below! 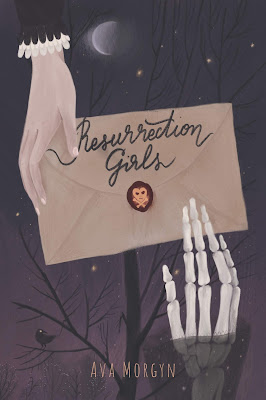 Olivia Foster hasn’t felt alive since her little brother drowned in the backyard pool three years ago. Then Kara Hallas moves in across the street with her mother and grandmother, and Olivia is immediately drawn to these three generations of women. Kara is particularly intoxicating, so much so that Olivia not only comes to accept Kara's morbid habit of writing to men on death row, she helps her do it. They sign their letters as the Resurrection Girls.
But as Kara’s friendship pulls Olivia out of the dark fog she’s been living in, Olivia realizes that a different kind of darkness taints the otherwise lively Hallas women—an impulse that is strange, magical, and possibly deadly.

Advance Praise:
“Ava Morgyn's passion and tenderness shine like a candle, guiding readers through the darkness of Olivia's story. Her compelling characters are made all the more real by the eerie undertow of myth. A beautiful, deeply emotional debut!”
–Sarah Porter, author of VASSA IN THE NIGHT and NEVER-CONTENTED THINGS

"RESURRECTION GIRLS is a heartbreak of a book, where love and loss writes letters to the strange things that lurk in the darkness. It's a stunning story that blends the inexplicable and the beautiful with the bittersweet."

–Rin Chupeco, author of THE BONE WITCH and THE NEVER TILTING WORLD
"A raw, poignant, unflinching examination of grief and healing wrapped up in a compelling story. Resurrection Girls is a brilliant debut."

–CJ Redwine, NYT Bestselling author of THE SHADOW QUEEN and the RAVENSPIRE series


"The lovely, assured prose draws on ancient archetypes and a lingering sense of dread to pave the way for a strange but satisfying conclusion ... Morgyn’s supernaturally tinged debut is a heartbreaking but hopeful exploration of death and grief."

I didn’t eat. It was impossible when crammed in a tiny booth, cornered between Prescott’s dimples and golden biceps, Kara’s cinnamon lip gloss, and my grandmother’s stolen ring. The aquamarine kept winking at me from her finger, a cold, accusing eye in its band of icy gold. It was the color of the Aegean Sea as I would have imagined it. That color belonged in Kara’s world, not mine.
“What kind of name is Prescott anyway?” Kara asked as she placed a pepperoni on her tongue.
I didn’t imagine anyone had ever dared to ask such a question of him before. I watched him from over the bubbles of my fountain drink, watched the way his eyelids dipped and his biceps tightened. Watched one corner of his mouth rise in a pleased way. Watched his weight shift on his elbows. He was a penny she set spinning on the table. He was circling for a place to land.
“A Republican one,” he said finally with a laugh.
Kara made a pout. “Are you as stuffy as it makes you sound?”
He looked at Kara. He looked at me. “I don’t know. Ask Olivia. She’s known me a long time.”
Kara cut her blue-gray eyes in my direction. This was a game for her, putting us all on the cusp of some social precipice, watching us dangle.
I tensed. Bit my straw. Released. “He’s alright.”
Prescott burst out laughing. “Thanks for the winning endorsement.”
Kara grinned proudly at me. I’d told a joke I wasn’t in on. But I half-smiled back, feigning intention.
I caught him looking at me four times after that.
Lunch was followed by the mall. I had no money for either. Mostly I followed Kara around. Watched her shoplift a set of bracelets and a hair band. Talked to Prescott while she tried on clothes she had no intention of buying.
I’d meant what I said at lunch. Prescott wasn’t like other guys with marble statue faces. He played basketball but wasn’t a total jock. He read books. He didn’t cheat in class or sleep around. He wasn’t a complete asshole. You couldn’t hate him for winning the genetic lottery, even if you wanted to. But he was still unreachable in so many ways. It’s not like he wasn’t aware of how he looked. It showed in the way he carried himself. The confidence born to those who haven’t suffered, who know they’ll never have to.
Kara, though, wasn’t like anyone else. She wasn’t a cheerleader or a beauty pageant wannabe. She didn’t act like the popular girls in my, or any other, grade. She didn’t look like them either, though she could have. It was more like she didn’t care to, didn’t have to. And she was all the more irresistible for it. She had one of the hottest guys in school sitting outside her dressing room after meeting her once. She stole things she probably could have bought just as easily. She poured magnetism into every gesture without breaking a sweat. She was the epitome of effortless. But not grace. There was nothing graceful about her. She was raw. She was salt in the wound.
She could cure. She could kill.


1.     What does your writing process look like?  Do you know the whole story when you start?  Or do you just start writing and go with it (seat of the pants writing)?  If you plan it out, how do you do that?  Outline, note cards, post-it notes, etc.?
I am what’s often called a “panster”, meaning that I simply dive in and make much of the story up as I go along. That said, I usually have a rough outline for the novel in my head when I begin, and now I put that into a synopsis first for my agent and to give a solid base to work from. As plot ideas come to me along the way but before I can write them, I will usually start jotting them down in a notebook or on scraps of paper. It’s not the most organized method, but so far it works for me.

2.     How do you come up with your ideas for your stories?
My inspiration comes from all over—personal experiences, documentaries, other novels … I usually start with a seed of an idea or a character and build a larger premise around that. I don’t start writing until I can hear the voice of my main character.

3.     How long have you been writing?
Eons? I’ve been writing for over a decade. I began in my late twenties. Put it down for a brief while, and then began again maybe a couple of years later. But it’s been a passion of mine my whole life.

4.     What tips do you have for aspiring writers?
Write. That’s my first tip. You can only call yourself a writer if you’ve written or are writing something. Writing is how you hone your craft. It’s how you improve and accomplish your goals. No book ever wrote itself.
And my second tip is to persist. It’s very easy to give up when you begin to experience rejection and disappointment. Depending on your particular journey, there can be much more of that in the beginning than encouragement or reason to carry on. But you definitely won’t make it if you stop writing.

5.  Favorites:
Books/authors/genres
Books: Something Wicked This Way Comes, Mists of Avalon, The Handmaid’s Tale, Vita Nostra, Born Wicked, Wild Beauty
Authors: Margaret Atwood, Anna Marie McLemore, I tend to have favorite books over favorite authors
Genres: YA all the way, fantasy, magical realism
Movies/TV Shows
Movies: The Dark Crystal, Practical Magic, The Goonies
TV: Game of Thrones, The Handmaid’s Tale, The Dark Crystal: Age of Resistance
Music
Music: I have to skip this one as I can rarely listen to music since my daughter died
Food/writing snack
Food: vegan curry, vegan chili, vegan hot dogs (I’m actually a little ashamed of this one)
Writing Snack: tater tots, Masala Lay’s, tortilla chips and fresh guacamole (coffee and guacamole must always be fresh at my house)


Ava Morgyn is a long-time avid reader and writer of young adult fiction. She studied English Writing & Rhetoric at St. Edward’s University in Austin, TX, and now lives in Houston—city with the most rain, best food, and worst traffic—with her family. When she isn’t at her laptop spinning darkly hypnotic tales, she can be found making fairy houses, talking to her crystals and plants, hunting for delicious new vegan recipes, or bothering her dog. She also blogs regularly about the devastating journey of child loss at ForLoveofEvelyn.com.