“Sarah Porter is a genius. Her language is lush and dangerous, and her books burn with the beautiful, ferocious intensity of a bonfire in the darkest night. Read Never-Contented Things with the lights on. Then read it again.” ―Brittany Cavallaro, New York Times bestselling author of A Study in Charlotte

“Sarah Porter’s Never-Contented Things creates a creepy new world like none I’ve seen before. Eerie, edgy, and filled with mystery, Porter takes us to the depths of the magical and psychological.” ―Danielle Paige, New York Times bestselling author of Dorothy Must Die

Praise for WHEN I CAST YOUR SHADOW

“Sarah Porter’s darkly imaginative WHEN I CAST YOUR SHADOW intrigues from the start. Tragic and engrossing, filled with nightmarish dreamscapes and menacing villains, it also treads the tender terrain of family, and the strange and sometimes dysfunctional ties between siblings. Highly recommended!”  —Kendare Blake, New York Times bestselling author of THREE DARK CROWNS 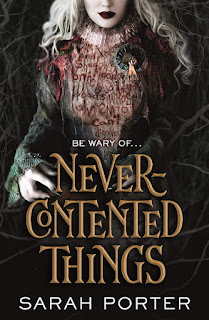 Prince and his fairy courtiers are staggeringly beautiful, unrelentingly cruel, and exhausted by the tedium of the centuries ― until they meet foster-siblings Josh and Ksenia. Drawn in by their vivid emotions, undying love for each other, and passion for life, Prince will stop at nothing to possess them.

First seduced and then entrapped by the fairies, Josh and Ksenia learn that the fairies' otherworldly gifts come at a terrible price ― and they must risk everything in order to reclaim their freedom.

You can purchase Never-Contented Things at the following Retailers:

My Review:
I'd been intrigued by this book when I saw it back in March, but didn't get the time to fit it into my reading schedule then. So when this blog tour popped up, I decided I really should make the time to read it now.  I picked this one up and sped through it.  It was really hard to put down.  The world the author created was so vivid and creepy, exactly as this kind of story should be.  But it wasn't all just atmosphere, the characters were so well developed and had so much depth.  I wanted so bad for all of them to be redeemed, to be saved, for the ending to be as happy as possible.  But the way it ended was perfect.  While most who deserved a second chance got it, not everyone got it in the way they wanted it or the way I as the reader wanted them to have it. And then there were the deaths that there was no way around, no way to save those characters.  Again, that was the way it should be.  Even though most everyone got their redemption, there were characters that you hated from the beginning, that really didn't redeem themselves even when they had the chance.  I like that as well.  Not all characters have to become better, because that just isn't realistic.

This was just a beautiful world that I'm so glad I got the chance to experience.  Can't wait to put in my school library and recommend to my students as well as the people who come into the bookstore where I work. 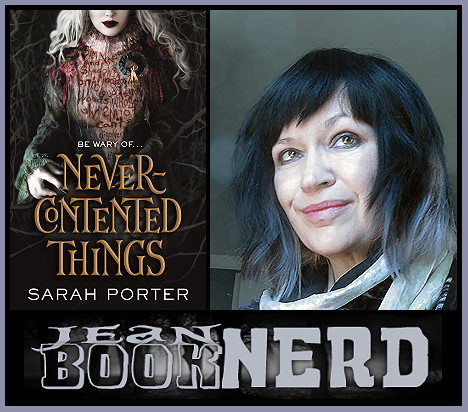 SARAH PORTER is the author of the Lost Voices Trilogy (Lost Voices, Waking Storms, The Twice Lost) in addition to Vassa in the Night—all for the teen audience. For over ten years she has taught creative writing workshops in New York City public schools to students in grades K-10. Porter also works as a VJ, both solo and with the art collective Fort/Da; she has played venues including Roseland, Galapagos, Tonic, Joe’s Pub, The Hammerstein Ballroom, The Nokia Theater, and the Burning Man festival. She lives in Brooklyn with her husband and two cats.