Up until now, most of the mini-reviews I've done in one post have been e-books.  About the only time I've done more than one physical book mini-reviews in the same blog post is when they were part of a series.  Well, as you've been hearing me say, I'm soooo far behind on reviews, that I've decided to do some grouping together of books and get some reviews done. So you'll get my thoughts on the book, and instead of my normal personal synopsis, I'll just share the one from Goodreads. 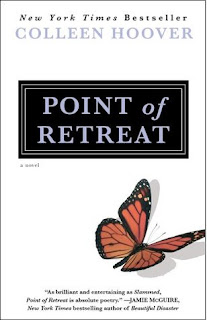 My rating:  5 stars
I got this book by asking a fellow bookstore employee to pick up the bargain copy at the Barnes and Noble store close to where she lived, since the one that we work at didn't have any in stock.  At first I didn't enjoy this as much as the first one, but then something happened that I totally didn't see coming and it really grabbed me.  I don't know if I'll go on and read the next book, since I think it is just the original book, Slammed, told from Will's point of view instead of Layken's.  But who knows.  If you want to read my review of Slammed, you can go HERE.

Layken and Will have managed to overcome the obstacles that threatened to destroy their love, proving that they are destined for one another. What they are about to learn, however, is that the things that have brought them together may be the very things that ruin their connection forever...

Layken is left second-guessing the relationship whilst Will is jumping over hurdles to prove his love for her. What the young lovers discover about themselves along this journey may change their entire world, and the lives of those who depend upon them the most...

The Secret of Ella and Micha (The Secret #1) by Jessica Sorenson: 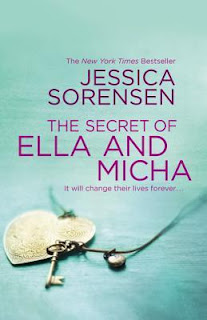 My Rating:  4 stars
This book is one that I found at either the Dollar Tree store. It made me want to read more books by the author.  It wasn't exactly what I'd expected, but I did read it very quickly and am glad that I have the 2nd book ready to go as soon as I get a chance.

If you loved Beautiful Disaster then you're ready to discover . .

THE SECRET OF ELLA AND MICHA

A rule-breaker with a fiery attitude, Ella always wore her heart on her sleeve. Then she left everything behind to go to college, where she transformed into someone who follows the rules, keeps everything together, and hides all her problems. Now it's summer break and she has nowhere else to go but home. But once there, Ella fears that everything she's worked so hard to bury might resurface-especially with Micha living right next door.

Smart, sexy, and confident, Micha can get under Ella's skin like no one else. He knows everything about her, including her darkest secrets. If he tries to tempt the old Ella to return, he will be impossible to resist. But what Ella doesn't realize is that when she left, she took a piece of Micha's heart with her. Now he's determined to win back the girl he lost, no matter what it takes. 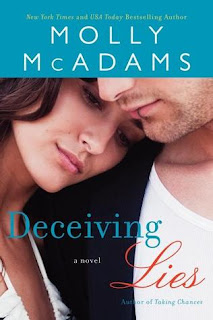 My rating:  4.5 stars
The first book in this series is the one that won me back over to this author after I'd been disappointed in the first book I'd read by her.  You can read my review of Forgiving Lies HERE.   This second book wasn't as good as the first one, probably because a lot of it was spent with the two main characters apart.  But, it was still so good that when I picked it up to read while taking a bubble bath, I didn't stop reading for an hour, yeah, the water was definitely not hot anymore by the time I finished.  But I didn't notice because of how into the story I was.  I did get this book and the first one both in the bargain section at the Barnes and Noble where I work part-time.

Rachel is supposed to be planning her wedding to Kash, the love of her life. After the crazy year they've had, she's ready to settle down and live a completely normal life. Well, as normal as it can be. But there's something else waiting—something threatening to tear them apart.

Kash is ready for it all with Rach. Especially if all includes having a football team of babies with his future wife. With his line of work, he knows how short life can be, and doesn't want to waste another minute of theirs. But now his past as an undercover narcotics agent has come back to haunt him ... and it's the girl he loves who's caught in the middle.

Trent Cruz's orders are clear: take the girl. But there's something about this girl that has him changing the rules and playing a dangerous game to keep her safe. When his time as Rachel's protector runs out, he will turn his back on the only life he's known, and risk everything, if it means getting her out alive. 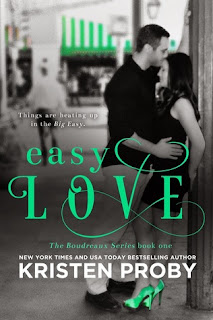 My rating:  4 stars
I got this book when I got to meet the author back at NOLA StoryCon in October.  I was definitely grabbed by the story in this book pretty quickly.  As I read, I realized the place that the main character was staying was very close to where I stayed when I was in New Orleans for the convention, and when she gets mugged, well, let's just say it made me think maybe I shouldn't have been walking around at night so much by myself.  Oh well.  Nothing to do about it now!  But I'm definitely going to read more in this series for sure.

Eli Boudreaux’s family has built ships and boats in Louisiana for generations. He comes from a hard working, wealthy family and his empire is growing by leaps and bounds. At thirty, he is the youngest CEO to ever head Bayou Enterprises, co-chairing with his eldest brother. His head for business and his no-nonsense work ethic is also quickly making him the best the company has seen in generations. His staff admires him, women adore him and Eli’s family is solid. But he’s recently discovered that someone on the inside of his business is stealing from him and he’s determined to find out who.

Kate O’Shaughnessy is hired by companies all over the world to slip inside and investigate every member of the organization from the CEO down to the custodial staff to find the person or persons responsible for embezzling. She’s excellent at blending, becoming part of the team, and finding the weakest link. She’s smart, quick-witted, and she’s now been hired by Bayou Enterprises, specifically Eli Boudreaux. The attraction is immediate and the chemistry is off the charts, but Kate has heard all about Eli’s playboy past and she has a job to do. Sleeping with the boss isn’t a part of that job, even if just the sound of her name rolling off that Cajun tongue and the way he fills out a designer suit does make her sweat.

Eli’s southern charms surprise Kate. The man whose reputation labels him as a ruthless, callous womanizer is not the man she’s coming to know intimately. He’s generous, protective and makes her smile. Cracking through Kate’s cool, reserved demeanor and discovering her love of sexy, expensive lingerie is a challenge Eli can’t resist, but her sweet nature, love of family and sense of humor pull at him in ways no one else ever has.

But when the person responsible for trying to single-handedly dismantle Eli’s empire comes to light, and it’s time for Kate to move on, to what lengths will Eli go to keep the woman he’s fallen in love with by his side?

Sins and Needles (The Artist's Trilogy #1) by Karina Halle: 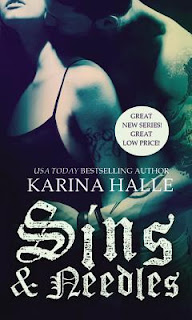 My rating:  5 stars
I first learned of this author when I downloaded and read the book Smut, which I loved and you can read my review of HERE.  Shortly after I read and fell in love with Smut, I found out that the author is going to be at ApollyCon in Marcy, and I can't wait to meet her now!  I will have to buy a copy of Smut too before I go.  Anyway, I ordered this book into my bookstore to buy, and this book was really good too. Although I knew that Camden was going to catch Ellie robbing him, it's in the synopsis, when it happened, it was still really sad.  But I really enjoyed the book, could barely put it down when I needed to in order to get to bed.  Now I just have to get ahold of the 2nd one to read on!

There's a Fine Line Between Sin and Salvation . . . Ellie Watt is a woman on the run. Raised by a pair of thieves who taught her the art of the grift-and pursued by a mobster who fell for her con-she hopes to find refuge at her uncle's farm in quiet Palm Valley, California. Ellie swears she's through with her life of crime. But before she knows it, she's right back in the game when she meets an easy mark who's too good-and too hot-to be true. His name is Camden McQueen. A master tattoo artist and a total inked stud, Camden is nothing like the awkward kid who crushed on Ellie back in high school. Now, as owner of the wildly successful Sins & Needles, he's got tats to kill for, muscles to die for, and money to burn. Ellie can't believe the transformation-and can't resist pulling off one last con. But when Camden catches Ellie red-handed, the tables are turned. The mark becomes the master. And when the ultimate player gets played, you never know who's going to end up on top . . .