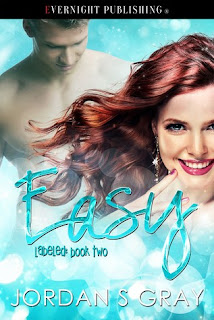 I loved this author's debut novel, Prude, and was very excited when she contacted me to see about reading the sequel.  This story featured one of the friends of the main character in Prude, and we were left knowing it would be her in the epilogue of that book.

Shayler is our main character, she was one of Rebecca's best friends from the first book.  As the titles of both books describe their main characters, Shayler was the wild, party girl, considered easy by guys.  Up until lately, that's been her M.O., she goes out to the bars, picks up guys, goes home with them for one night, maybe more, but usually not.  She's not looking for a relationship, and in fact just being around her best friend Rebecca and her boyfriend Derek is nauseating to Shayler.

Unfortunately for Shayler, she's hit quite the dry spell, a whole month, where she's had to rely on her vibrator for her orgasms.  She can't seem to get the guys to go home with her.  Only the ones that she knows want more than just a casual relationship, and the creepy older bartender seem to be interested.  So when she sees a sexy, kinda nerdy guy at the bar one night, she heads over, pretty sure he'll be a definite conquest for the evening.  However, he turns her down flat, doesn't even seem interested at all when she comes over and flirts with him, tells her he's not interested in that type of relationship, or lack of relationship.  He even calls her easy.  And from that moment on, Shayler feels like he put some kind of curse on her.  The next time she goes hit on a guy at a bar, she gets the same kind of reaction, well, they don't pay much attention to her, and they basically call her easy as well.

But it's not only her love life that seems to be going downhill, turns out in order to stay at school with her scholarships, she has to pick a major.  Shayler has no idea what she wants to do.  She also finally goes to a class she's yet to attend so far this new semester, and it turns out the TA in the class is the nerdy guy from the bar, David.  Her first day in the class isn't a good one.  The professor is a jerk, and embarrasses Shayler in front of the whole class.  But Shayler is pretty sure she can tell that this professor is like the others, and that if she just dresses the right way, and lets him know she's available, she can pass this class as she's done other classes in the past.  But the professor doesn't seem to pick up on that, or else he's just a jerk, because he definitely checks out the skin she shows, even while scowling at her the whole time.

David ends up offering to help her study, and soon she is back keeping up with her class, and trying to also figure out what she wants to major in.  She and David become friends, and soon it seems that maybe there is more between them, which will scare Shayler, who has never wanted to be in a relationship.  Between her fears, and other things going on, this relationship will have trouble going anywhere, and she will also start having trouble in other relationships in her life, pushing her friends away even.

Once again the author has written dialogue that caused me to laugh out loud, almost snorting at times, even sitting in public!  I had trouble putting it down, needing to know what would happen next.  There were all the funny parts, but then even the big disaster before the finish had me in tears.  It also had me wanting to go back and reread the first book.  Which I may have to do soon!

My only real issue with the book is that I have some trouble believing that a pretty girl would not find someone with  her easy reputation. That guys like the ones, not David, but the other guys, would not take her up on her offer as being easy.  But who knows.

Oh yeah, she calls her 35 day dry spell a desert.  And I have to say, no sweetie, that's only a grain of sand compared to my dry spell.