Promo Post: Change of Heart by Daniel Side @daniel_side 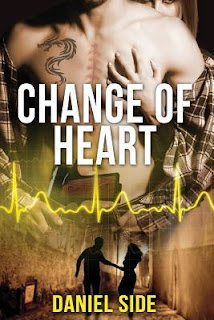 Patrick Corman, loner, ex muscle for a call girl service, struggles to stay alive and care for his institutionalized daughter. But now the danger isn’t coming from the streets. He needs a heart transplant. Shocked when, with only months to live, a mysterious benefactor offers him ‘the deal of a lifetime’, he sees it as a solution, even after reading the fine print.

When his former crime boss suspects that he is revealing information about her, and a young newspaper reporter sees him as her chance to get her own by-line, Patrick’s life and death struggle escalates. For her part, reporter Katherine Alderson keeps secret what she knows about his transplant, unaware that Patrick has his own secret, hidden in the fine print of the deal he agreed to.

Patrick’s new heart draws them together and into a conflict neither could have imagined when they discover someone has delved into their lives, using them as pawns in his own political game.  Fighting to stay alive, one shocking revelation follows another, exposing the best and worst in both of them.