Review and Giveaway: I Love You* Subject to the Following Terms and Conditions (Contract Killers #1) by Erin Lyon 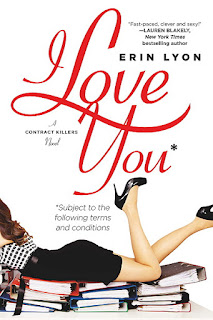 It was the description of this story that caught my attention.  And I can tell you that the actual story did not let me down, well, other than the fact that it kind of left off on a slight cliffhanger.  I knew this was a series, but kind of thought maybe each book would be about a different romance?  Seems like it will be about the same couple.  Which is okay, just now I have to wait for the next book, I'm guessing a whole year?  Noooooooo!!!  So, let's figure out how I get to be a beta reader so that I can read it even earlier than the next advanced copy?  I guess you can figure out from that last sentence and my 5 star rating that I really liked this book!

The story takes place in a world a little different from out own.  People don't get married, they have contracts.  Usually they are seven years long.  At the end of the contract you can decide if you want to stay with that person, or if you want to end it and move on.  Sometimes people do cheat on each other or do other things that break their contract, and then they have to deal with lawyers and the court to determine what should happen with their contract.  The main character is Kate.  Kate just finished law school and is having trouble finding a lawyer job that she wants.  She could go work for her uncle, who works in contract law, but that is her last choice.  She thinks that has to be the most depressing type of law, because you spend your time with people who breach their contracts, and basically it would be like being a divorce lawyer in our world I think.  Kate has been in a contract with a guy named Jonathan, and she is in love with him, and he says he loves her.  But then, right before their contract is set to expire, Jonathan tells her he doesn't want to renew.  He says he still loves her, but just wants to try some time apart.

Right before all this happened with Jonathan, Kate had been at the bar with her best friend Logek, pronounced "logic".  An extremely attractive guy named Adam Lucas comes up to Kate and starts flirting with her, even though she has on a tag that shows she is signed (in a contract with someone).  Turns out Adam is what is known as a contract killer, he only dates women who are in contracts.  And he is famous for it.  He only dates them because he doesn't want anything that would be serious and could lead to complications like contracts.  It seems he wants Kate.  But she is in love with Jonathan.

And then Jonathan doesn't renew their contract. Now Adam isn't interested in her as anything other than a friend, it's like he flipped a switch and all of a sudden was no longer attracted to her.  But he also has a friend who is another contract killer named Dave.  And Dave seems to still be interested in Kate even though she's now not in a contract.  But Kate can't quite figure out if he's still playing her, or maybe wants her for more.  Plus, Jonathan is able to get her to have sex with him when she goes to get her stuff, and sex with Jonathan has always been great, he knows exactly what to do for her and he always does it.  Not to mention that Kate is totally attracted to Adam, even though he has no interest in her now.  Or so he says, while a kiss or two between them says differently.

Being separated from Jonathan forces Kate to move home with her parents and she has to find a job that she can afford to move out on her own now.  So she gives in and takes the contract law job with her uncle.  She seems to be the only female attorney, and man is this place definitely testosterone filled.  One of the partners is kind of creepy, always staring.  The other guys are just kind of jerks.  And her uncle is totally a sexist pig.  Her times in the new law firm start off with a bang, a bang that leads to a black eye.

The job has so many hilarious episodes, and there is so much going on with all three of the guys that I could barely put the book down to work or sleep.  And when I got close to the end and realized there was no way the whole story could possibly be wrapped up in that book, I was definitely going crazy!

I highly recommend this for a fun read, and a different read, the whole contract vs. marriage different world makes for a neat story. 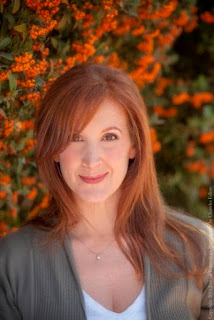 ERIN LYON is a practicing attorney who spends her free time writing novels about lawyers. I Love You* Subject to the Following Terms and Conditions is her debut novel. Visit her online at: www.erinlyon.net. 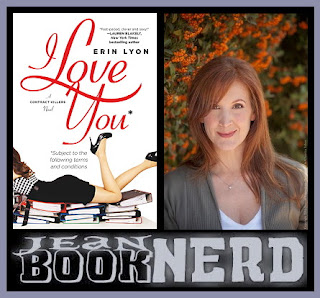 --Giveaway is open to International. | Must be 18+ to Enter

- 10 Signed Copies of I Love You* Subject to the Following Terms and Conditions: A Contract Killers Novel by Erin Lyon

You can check out the rest of the tour stops HERE.
Posted by Lisa Mandina at 7:00 AM