Promo Post and Giveaway: Falling for the Girl Next Door by Tera Lynn Childs 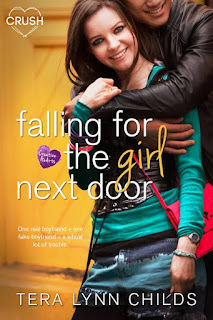 Title: Falling for the Girl Next Door

Sloane Whitaker never expected to like living in Texas, but after a few months in the Lone Star State, she has to admit she likes the food, the school, and the boy next door. What she doesn’t like is the fact that half her family is still back in New York. Convincing her dad to relocate to Texas requires making their upcoming visit as perfect as possible. The perfect dinner, the perfect daughter…with the perfect boyfriend. But when her not-so-perfect boyfriend Tru Dorsey is suddenly not-so-available, Sloane has to find another dad-impressing guy to show off at dinner. Tru himself suggests enlisting the help of a fake boyfriend, but the reality of another guy with Sloane on his arm might be more than Tru can manage. Add in a mysterious blackmailer and a divided family, and Sloane and Tru’s relationship might not be able to handle the heat.

Disclaimer: This Entangled Teen Crush book contains a bad boy next door, the good girl who snags his heart, and one epically disastrous ruse-gone-wrong. Join the fun at your own risk. 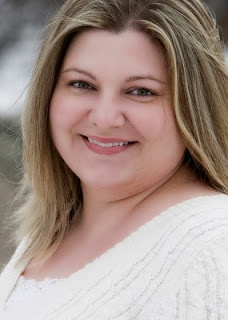 Tera Lynn Childs is the RITA-award-winning young adult author of the mythology-based Oh. My. Gods. series, the Forgive My Fins mermaid romance series, the kick-butt monster-hunting Sweet Venom trilogy, and the Darkly Fae series. She also writes the City Chicks sweet chick lit romance series and is co-writing the Hero Agenda series with Tracy Deebs. Tera lives nowhere in particular and spends her time writing wherever she can find a comfy chair and a steady stream of caffeinated beverages.

Read below for an excerpt from the book:


By lunchtime, the morning clouds had cleared, and the bright blue of a clear sky and soft winter sunlight practically begged Tru to film something.

He pulled his smartphone out of his pocket and opened the camera app. If he had his choice of gear, this wasn’t even in the top ten. He had three quality cameras at home and there were at least a dozen in the Cinematography classroom in Building F. Hell, he even had a decent handheld in his backpack.

But what the smartphone gave up in quality, it more than made up for in portability and the ability to take candid footage.

Sloane didn’t even notice when he started filming.

Her friend Jenna glanced at the camera and then back down at her carefully arranged lunch.

Tru loved capturing these secret moments. Not just with Sloane, although he probably loved those the most, but in everyday life in general. Those instances that happened over and over again, most of the time without anyone taking any more notice than they do of a gentle breeze.

To capture those moments, to document them for eternity—or at least as long as the technology would allow—made him feel like he was contributing to something greater than himself.

And the intersection of life and art described his relationship with Sloane perfectly. She came into his life at a low point, at a moment when the prospect of spending another year in the uncertain torment of life under his father’s roof was becoming unbearable. She moved in next door and provided a light at the end of the tunnel. If he could just keep walking toward her, just keep her light in sight, then maybe—just maybe—he could make it out alive.

He knew he was being a bit melodramatic. His life wasn’t actually on the line. The situation with his father never escalated to a dangerous level. But escape was almost always on Tru’s mind. Sometimes he felt like he might go insane under the constant scrutiny and attempted control.

Ever since Sloane and her mom moved in next door, he’d been thinking about escape less and less.

She gave him a reason to stay.

A grape popped him in the forehead as Sloane finally realized he was filming her.

“What?” he asked with a grin, shaking off his dark thoughts.

“We talked about this,” she said. “No filming me without warning.”

“No, you talked about it.” He kept filming. “I never agreed to anything.”

She reached for the phone, but he pulled it out of reach, careful to keep her in the frame.

“This is why I can’t bring you home to meet Mom,” she teased.

He knew she meant it as a joke—he’d met her mom dozens of times. They were neighbors, after all. But there was an edge of truth beneath the sarcasm. An edge just big enough to sharpen his own humor.

“But does it explain why I can’t bring you home to meet the ‘rents?” he tossed back. 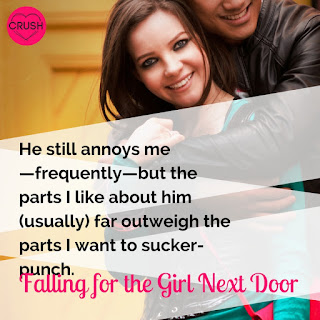