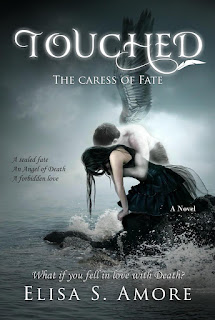 #1 Amazon Bestseller for more than six months, surpassing The Hunger Games, The Hobbit, and Divergent.

One of the most read books on Amazon in the last two months.

The International sensation that everyone is talking about is now available in the U.S. and we would love to have you share it with your readers.
~~~~
What are you willing to sacrifice when the only person who can save you is the same one who has to kill you?

A new breed of Angels is here to usher you into their dark world in Elisa S. Amore’s breakout bestseller TOUCHED: The Caress of Fate. “As seductive as Meet Joe Black. As mysterious as City of Angels. As powerful as Twilight,” Amore has written the bestselling angel series that everyone is talking about.

“Elisa S. Amore is one of the few phenomena in Italian self-publishing.” — Vanity Fair Italy
“Girls who dream of love, a new novel just for you has come out in bookshops.” — Marie Claire Italy

When Gemma’s eyes first meet the dark, piercing gaze of Evan James, an ominous shadow creeps into her life, ultimately leading her to face her destiny. She doesn’t realize Evan is one of Death’s soldiers and that Death is summoning her.

Her time is up: Gemma must die . . . and Evan has been sent to kill her. But what if she’s the only one who can truly see him?

An ancient, deadly, inescapable race. No one can see them. They’re shadows of destiny. They’re knights of death. They’re here to claim our lives. Commanded by a mysterious congregation called the Masala, the Angels of Death ensure that each man’s destiny takes its due course on Earth. But what happens when love intervenes? Can an Angel of Death deny his own nature and challenge destiny? Can love rebel against fate?

Against every rule. Against fate itself. Against everything and everyone. A story of forbidden love and star-crossed destinies. Dark. Romantic. Dangerous.

I usually know how the story starts and how it is supposed to end, but sometimes I don’t know in advance what will happen in the middle. When the idea for Touched first came into my mind, I imagined the main scenes for the whole saga, from Book 1 to Book 4. The rest of it, though, wasn’t planned in advance. Once I start writing, it’s like the characters make their own decisions and lead me to the next planned scene. When I have a new story to write, even when I’m not actually writing, I’m always thinking about the characters. They interact in my mind just as if they were real people and I take notes on their interactions, using whatever writing materials I can find first: tissues, napkins, my phone—even my hands! Whatever happens to be handy. Then, when I sit down to write later, I read through my notes and develop them into more complete scenes.

Inspiration can hit me at any moment, but I usually get the best ideas while I’m in the car. The story of Evan and Gemma, for example, came into my head suddenly one day while I was driving to work. I had a sort of vision—I saw a boy with eyes of ice staring at me from the side of the road and I immediately knew he would be the protagonist of a new story. I thought, "Who was that guy? And why was he staring at me so intently? What if I were the only one who could see him? And what if he were there for me?" Next, I came up with the most important question of all, the one that gave me all the answers: "What if he were there to take me away?" It was while I was pondering that last question that the idea of the Angel of Death appeared in my mind. I immediately pulled over and started to write it down. I didn’t stop until I’d created the outline for the whole saga. During that time of my life, I waited tables at my parents’ cafeteria. That day I was definitely late for work! When I finally got home, I couldn’t wait to find out how the story would continue. I sat down and wrote for hours.

I’ve always loved stories, whether they’re on the big screen or on paper. At some point I began to be fascinated with the idea of being able to write a story myself. Writing has always played an important role in my life. I was a shy child and had difficulty socializing, so I used to create characters on paper, imagining new worlds where I could take refuge. Even at the age of ten or eleven, I wrote short stories and poems for the school newspaper. Touched is my first full-length novel, the one that made me realize how important writing was to me. When I started writing it, the characters took over and guided me towards their destiny rather than the other way around.

Find your style and don’t emulate others. Keep reading and writing to improve your own voice. And never, ever give up.
5. Favorites:
Books/authors/genres
Movies/TV Shows
Music
Food/writing snack
Social Media Site

My all-time favorite writer is Shakespeare, but I also love Nicholas Sparks. My favorite genres are romance, fantasy, dystopian, and everything related. I read a lot and am a huge fan of many TV series. My all-time favorite movie is Pearl Harbor. I’ve watched it over and over. Some of my favorite series are The 100, Flash, Arrow, The Vampire Diaries, The Originals, and many, many others. I love how the characters face new challenges every day and how they never surrender. It’s motivating for me, and each of the characters inspires me. I love Lana Del Rey as well—in fact, the protagonist of Touched always listens to her songs.