Review: The Taking by Kimberly Derting 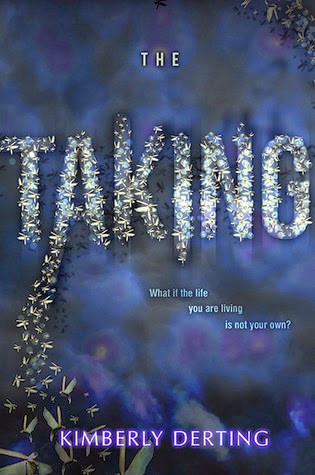 First of all thanks to Edelweiss and Harper Teen for allowing me to read an e-galley of this book.  I thought it sounded really good, and then was even more excited to read it when I found out Kimberly Derting is supposed to be one of the authors at the panel I might be getting to lead in May.  And let me say this, even though the book doesn't come out until April, I am already needing there to be a sequel!  While there isn't one listed yet on Goodreads, the fact that it has in parentheses: The Taking #1, makes me know that I won't be disappointed!

The main character is Kyra, and she is a softball player and we begin with her team having just won the championship.  She's so excited and ready to go the celebration with her best friend Cat and boyfriend Austin.  But she promised her dad she would ride to the celebration with him because he had something important to talk to her about.  On the drive they get in an argument over what college she should go to.  Kyra's dream is to go to college with her boyfriend.  Her dad of course wants her to go to one of the good colleges that is offering her scholarships for her softball.  They keep fighting until Kyra orders her father to stop the car and she will walk the rest of the way.  As she gets out, her father also gets out to try to convince her to get back in the car.  All of a sudden there is a really bright light, and she hears her father yelling for her, and then there is nothing.

When she wakes up she is behind a gas station.  She's not sure how she ended up there, why she would spend the night behind the gas station.  So she walks home.  As she walks home, things in her town are the same, but something seems off, she can't quite put her finger on it.  When she gets to her house, she realizes she'd left all her stuff in her dad's car, so she reaches in the hiding place for the house key, and it isn't there.  She looks in the window and sees a little boy she doesn't recognize in her house.  Then a man comes to the window.  When he opens the door, she asks why they are in her house.  Nothing is figured out, so she goes across the street to her boyfriend Austin's house.  His mom is there.  So she feels at least like things aren't completely wrong.  But then she finds out it is 5 years later than the day she last remembers.

Everything is changed.  Her mom and dad are separated, that kind of thing is always traumatizing to married couples it would seem.  Part of the problem is that her father is so sure that she was "taken" or abducted by aliens.  And he has really gone a bit crazy with all of his research.  Her mother is now remarried, and the man and little boy at her house are her new stepfather and younger brother.  All Kyra has thought about since she got back was seeing her boyfriend Austin, and then of course finding her best friend Cat.  They are now 22, and so away at college.  But things have changed with them.  Something that is even more changed is Austin's younger brother Tyler.  Tyler is now basically the same age as Kyra, since she doesn't seem to have aged at all.  And he looks a lot like Austin, she almost mistakes him for Austin at first.  But while things have changed in the world around her, she has changed as well, even while staying the same age with the same bruise from the day before, and the same tan lines.  Food doesn't taste the same to her.  When she tries to throw a softball, she throws it so hard it busts through a wooden wall.  And there is an NSA agent bugging her.

Kyra must figure out what happened, where was she for 5 years?  Why is there an NSA agent after her?  Is it okay to have these feelings that seem to be developing for Tyler?

This book kept me on the edge of my seat.  Was she abducted by aliens?  Or not?  What did they do to her if she was abducted?  How will she fit into this new world that has gone on without her for 5 years?  And the ending?  Wow!!!!!  I can't believe it ended like that!  I don't know if I can wait a year or however long it is until a sequel comes out.  I am going to have to talk to this publisher about letting me on the list to get a copy of the sequel as an e-galley or ARC.  Love, love, loved this book!!!!
Posted by Lisa Mandina at 6:45 PM