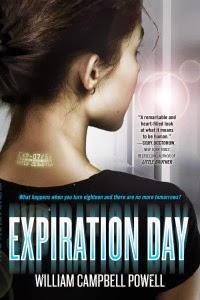 Thanks again to Tor Teen and Edelweiss for allowing me to read an e-galley of this back in the fall.  I chose this one based on the synopsis, and it wasn't bad.  I enjoyed it, and once I got into it I was hooked. I do have to say that unfortunately the end of it was disappointing though.
The main character is Tania Deeley.  It is the year 2049, and humans are dying out.  Fewer and fewer people are able to have children.  Now this is something that seems pretty realistic in a way to me.  It seems there are more and more people who have to go through doctors with lots of help to get pregnant.  And even then it doesn't always work well.  So I like this bit of reality pulled in to make the story.  So in this future, to help stop the violence that had been overtaking the world, the robot industry, and the government, now offer to families who are unable to have children a robot child.  But this robot is so lifelike, the parents don't usually even notice it is a robot.  Part of the contract is that the "child" will get updates every so often, so that they "grow up".  The robots don't know they are robots.  When they go have their updates, a story is told that they had to have surgery, and they remember being like they are now.  Now, they only get to be with their families until they are 18.  At which time the company that they came from takes them back.  Supposed to be the same as normal children who go off on their own at the age of 18.  We begin with Tania who is the daughter of the Vicar in her town.  She has a loving family.  She wonders which of the children around her are robots.  She does know of one boy that was a robot because she found him after he fell in the water.  She thinks maybe the one girl that she is really friends with, Sian, might be.  But then she has to help her with school work, and Tania doesn't think that sounds like something a robot would need help with. So she's unsure who is.  Until she goes out on a holiday with Sian and her family.  And as they're playing a game of hide and seek or tag or something, Tania falls in the water.  And now Tania knows she is a robot.  Normally, once the robot children find out they are robots, they often begin to act weird, and the family can no longer handle them.  And so they send them back, and get a partial refund.  But Tania and her family seem to get past all of this okay.  Tania also met a boy on a past holiday named John.  But she doesn't want him to know she is a robot.  But she decides she's ready for an upgrade because Sian is growing up, and Tania doesn't want to look like a 13 year old, she wants to look older.  So we get to follow Tania through her life, and see how being a robot might affect her life now that she knows.  But sometimes she wonders how can she just be a robot.  She loves to play the bass guitar.
I love the story, and the build up of how can this be just a robot when she has feelings and makes her own decisions.  Her family also got a robot servant before she knew she was a robot, but he was not like her.  He had to be given orders and told what to do.  You really feel for Tania, and when it gets close to her 18th birthday, and her father wants to fight to keep her, I really enjoyed the evidence he gathered and how he presented it to the judge/magistrate.  I won't tell you how the book turns out.  I just don't know that I was satisfied with the ending.  Oh yeah, the book is told in a diary format, and Tania pretends she is writing to an alien named Zog.  And partway through the book, it is as if this alien has found her diary and we get his point of view.  Not sure how I felt about that part either.  Overall a good, quick read.  Just not probably the best wrap up to the story.  I must say I am glad to read something that is a standalone for a change instead of a series.
Posted by Lisa Mandina at 10:00 AM