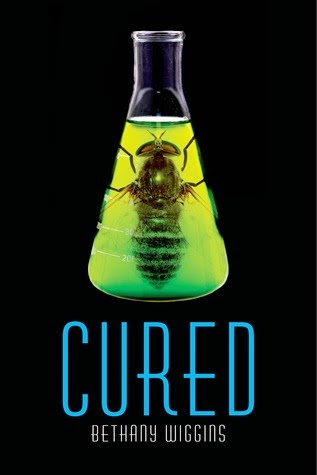 As usual I must first thanks Bloomsbury USA Children's Books and Netgalley for allowing me to read an e-galley of this title.  I got to read the first book as an e-galley as well and really enjoyed it.  You can read my review of Stung HERE.  I enjoyed it so much that it is one of the first titles I ordered for the library in the school where I now work.

I was very excited to get this e-galley, but when I started it, at first I was a little confused at whether the story was way after the first one, or maybe going to tell the story before.  The main character in this book is a girl named Jacqui, or Jack, a boy as she has had to become in this new world when women are scarce.  Turns out she is the neighbor girl from the first book that gave that main character, Fiona, some food when she was running to find her brother.  Jacqui had decided she is tired of hiding in her family's home, and wants to go find her older brother who had left awhile back to get Fiona's mother to a safe place when she was kicked out of the walled city.  On her way to find her brother, she ends up at the city and gets Fiona and Bowen, as well as Fiona's twin brother Jonah, to help her go find her brother.  While they've brought not a lot of supplies, they did bring a huge backpack full of water.  Although it turns out, this may not be just plain water as we learn later on.  Along the way they must try to avoid the Raiders, as well as other dangers.  Their first stop is to get help from someone who is supposed to have maps.  Turns out he is a raider, and sets the others on their trail.  They run into a guy named Kevin, who helps them out, even leading them to an underground bunker full of food and basically as safe as can be.  Something about Kevin seems off though.  He knows that Jack is really Jacqui, but no one has told him, so that's a mystery.  Plus, there is something familiar looking about him.  And the shelter has a passage that goes to a house, where Jacqui learns more about who Kevin really is when she sneaks up there.

This book has lots of exciting moments, and while it is somewhat of a traveling book, they are trying to find people, there is a lot of dealings with the Raiders.  It gets really dangerous when some of them are caught, and they are threatened to be bait for the new dogs that have been created with the virus.  Jacqui's brother is found in an unusual place, and the backpack full of water turns out to be a big help as well.  The people being searched for are found, and so I wonder if this is the final book, or if it will go on.  There is nothing else listed on Goodreads, and this could definitely be an ending, but it is also left open for more possibly.  I will keep my eyes and ears open in hopes.
Posted by Lisa Mandina at 4:47 PM