Review: The Blood Gospel by James Rollins and Rebecca Cantrell 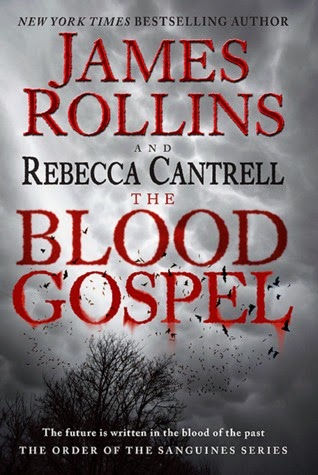 I have been a huge James Rollins fan for a long time.  But in the past few years I've kind of slacked off on reading his books.  His Sigma Series I really enjoyed at first, but just haven't been in the mood to pick up and read, so now I'm a few books behind in that.  One of my co-workers at the bookstore is also a James Rollins fan, and kept telling me I needed to give this new series a try.  When a paperback copy showed up in our strip cover box of books, I grabbed it.  And when I picked it up and started reading, I was hooked!  Unfortunately, as I've mentioned before, there was a reason that book was in the strip covers, it was missing a few chapters.  So, when I finally found the book on bargain hardcover price, I bought it, and went ahead and finished it this week.  While it still has all the normal Rollins bits to a story, you can tell there was a co-writer, and I'm guessing part of Rebecca Cantrell's job was adding in some of the romance parts.  Not too much to make it over the top or too extra, but enough to make it good.

The book basically begins with an earthquake in Masada, Israel.  And this is where our main characters come together.  There is a teen boy who gets sick when some kind of gas escapes from the fissure made by the earthquake, but everyone else around him seems to die from the gas.  There is the military guy, Jordan, who is in charge of cleaning up the area and trying to figure out what caused all these deaths.  We also have an archaeologist named Dr. Erin Granger, who is on a dig site near the earthquake.  And finally we have a mysterious Vatican priest named Rhun Korza who is supposedly brought in to give the last rites to the dead.  And the final main character is a woman called Bathory, who has supernatural ties to where this gas comes from.  Sergeant Jordan Stone calls Dr. Granger over to the earthquake site because it seems to be an ancient tomb of some sort.  And now all the excitement begins.  Bathory is trying to find what was buried in this tomb, the actual gospel of Christ supposedly.  And she has evil, unearthly creatures in her service.  Huge wolves, and vampires, or as they are called here, Strigoi.  Turns out Rhun also has connections to these creatures.  And Dr. Granger and Sergeant Stone will be needed to help form a specific trio that will find and unlock this gospel.  They will find other types of vampire creatures, ones that are faithful to the church and no longer drink human blood.  Stories of the bible that relate in new ways once thought about from a different point of view.  Other historical tales, Rasputin, the Countess of Bathory, Lazarus, etc.  We don't get a lot in the story about the teen boy at the beginning.  But I have a feeling he will really come into play in the next book in the series.

A fun, but makes you think story.  Fans of the Da Vinci Code types of books will enjoy this series I think.
Posted by Lisa Mandina at 9:00 AM