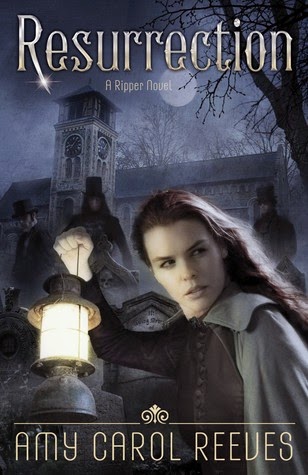 Again, thanks to Flux and Netgalley for allowing me to read an e-galley of this book.  I have to say this was a perfect conclusion to this story.  All the loose ends left from the last book were tied up.  We learned basically all about the past of the bad guys, as well as the families of the good guys.  My only complaint is something that has absolutely nothing to do with the story really.  Since this was an e-galley I'm sure there will still be so much editing done before it is published.  But this is the first time I have read one with so many errors.  My guess is that the author was just so into the story that she just wrote and didn't go back and spend a lot of time making sure it all flowed.  There were sentences that seemed like she started to say something one way, but then finished the sentence another way, which could mean repeated words.  Now both ways would work, but just not together.

Our main character Abbie is back, along with her friend Simon, and her love, William.  The love triangle is still there to a point.  But Abbie knows that she loves William for sure, even though Simon does still love her, and everyone else feels that Simon would be better for her.  She's back in London with her grandmother, and working at the hospital.  But there are still the undead out there attacking people.  And there is someone new to care for, Laura, who is the granddaughter of the main who helped them get to the island where they found the Lamia that they killed in the last book.  William starts the book recovering from his injuries from the last book.  And Abbie and her grandmother are attacked in her grandmother's home by one of the resurrected.  In fact it is Abbie's friend, yet she has changed besides being dead.  She now is a killer, and enjoys it.  She kills their maid, and tries to get Abbie's mother.  Fortunately they end up getting away that time.  But now Abbie must tell her grandmother about all that has been going on, and she must move her out of the London house.  Only it isn't over, Max is still following Abbie.  He wants her to become immortal like him, to take the elixir.  And he is not the only one, there are two other men that have been around him.  One looks so much like William it is scary.  And there is a reason for that, they are related.

There is a lot of action in this story, and it all concludes in a really exciting suspenseful confrontation between Abbie and Max, at the location they first met, the White Chapel hospital.  I loved the story, the way it concluded was great, even if it was really sad.  And the final bit?  I loved it.  Just the thing I want to know about what happens after a story ends.  I'm a huge fan of this series, and will always recommend it to others.
Posted by Lisa Mandina at 5:37 PM