Review: House of Ivy and Sorry by Natalie Whipple 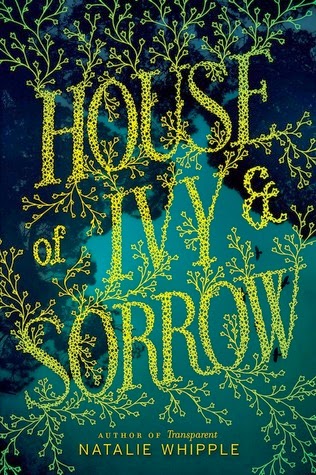 First, thanks to HarperTeen and Edelweiss for allowing me to read an e-galley of this book.  I requested it quite a bit ago, and just finally got around to it about a month before it will be published.  It was a quick read, but a good read.  I feel like it had a little original twist to the way the witches/magic worked, at least for the books about magic/witches that I've read.

The main character is Josephine, and she lives with her grandmother in a house that is on a magical spot in the area where they live.  These witches get their energy from magical spots or life/nature basically.  And they are territorial in a way, once you find a spot, you build your house there, and your family stays there and protects it as they use it.  Jo lives with her grandmother because her mother was killed by the Curse that has been used to kill witches throughout time it seems.  She doesn't know her father, because in this world, only women have magic.  And so men can't stay after the children are born, because they are not supposed to know about it.  In fact, when men know about it, they usually become evil, Shadows I believe they are called, or Shades.  Other than having lost her mom to the Curse, Jo's life doesn't seem too bad.  When she hit a certain age, like all witches, she really hit what you might call a growth spurt, and has outgrown her freckles and become quite beautiful.  Other than her frizzy hair if you ask her.  And now she has attracted the cutest guy in town, Winn.  Not only that, she has the two best friends a girl could ask for, Gwen and Kat.  Of course no one knows she is a witch, that is part of it, keeping it secret.  They are even able to keep their house's actual location secret by having doors that open to different places around town.

One place is under a bridge, and they go outside there to often get things they need for their spells, bugs, snakes, etc.  One day when Jo goes out to get something for her grandmother, a man is there.  She doesn't know who he is, but there is a blackness about him.  He asks for her mother.  When Jo goes back in, she tells her grandmother about him, and her grandmother tells her to stay away from him.  Turns out, he does have a connection to her and someone has kind of "booby-trapped" him to try to get ahold of her and curse her.  When they try to save him, her grandmother must help, and she takes on the darkness.  Jo will also have to decide as they discover who this darkness is, and as her friends and family are threatened, who can she trust?  Can she break the rules and let her friends or boyfriend in on the secret, if only to keep them safe?  And not only that, there is another new guy in town, a young guy, a hot guy, one who seems to have magic somehow, even though that is not supposed to be something that can happen.

While I can see that there might be a bit of a love triangle started, I'm pretty sure it went the way it should, and that Jo saw exactly how it should be, but how it could have been if she'd met one boy before the other.  I feel there could be sequels, but I'm very happy with how it ended, and think it should remain a stand alone.  Although, re-visiting these characters would be nice too, and I would definitely read any others like it.
Posted by Lisa Mandina at 11:03 AM