Review: The Selection Stories: The Prince and The Guard by Kiera Cass 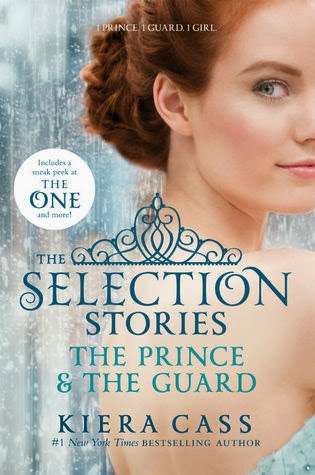 I bought this last weekend at the bookstore when the main book I went to purchase had to be ordered.  While I'd already purchased and read the first one, The Prince, as an e-novella, I went ahead and bought this physical copy because not only did it have the next novella, The Guard, but it had some great extras too!  So first I'll review the 2nd novella, then I'll tell you about the extra goodies.

The Guard is 2.5 in the series.  It happens after The Elite, almost kind of during it as well.  We get to see the story through Aspen's eyes.  If you've read the series you remember that Aspen is the boy America was in love with at the beginning of The Selection.  But then of course, he told her to go ahead and enter the contest, which she did, and now she is conflicted of course, between Prince Maxon, and her first love, Aspen.  Aspen has realized of course, that he still loves America, and that she is the ONE for him.  But now he must see how he can convince her.  Only, he is now a guard in the palace, so while he does get to see America, to try to be romantic with her would only get him punished.  As well as America.  In this book we get to see the punishment of another contestant from book 2, but this time through Aspen and the other workers of the palace's eyes.  While it does make me like Aspen better than I did after what happened at the very beginning of the first book, I'm still a Prince Maxon fan all the away.

Now, on that note, let me say that I'm very worried about who America will end up. The reason for that is because of something I read in the Bonus Contest, the Q&A with the author.  I won't tell you exactly what she says, and she doesn't even say who America will end up with.  She just says something along the lines that she didn't know for sure what would happen until America told her, and she says it in a way that makes me think she was a bit surprised.  Which worries me!  While there is a short excerpt from The One, the 3rd and final installment in the series, and one of my most anticipated books of 2014, the question section is my favorite part of the bonus content.  But there are some other really cool things:  explanation of each of the levels of the castes.  I would be a 3 for example, because first I was a teacher, and now I am a librarian.  Then there are the family trees for our three main characters, America, Aspen, and Maxon.  After that is a playlist of songs for both the first and the second book.  Makes me want to go back and read them while listening the songs that go with each section.

This is definitely a good value, and I would recommend buying it and reading it if you love the series.  Especially if you own physical copies of the book, you'll need this instead of the e-novella versions.  Now, I must wait till May.  And the possibility that I may get to moderate a discussion with Ms. Cass and some other awesome authors!
Posted by Lisa Mandina at 4:42 PM