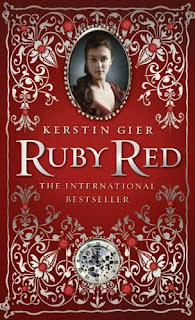 I've wanted to read this book since  first saw it on the shelf in the bookstore where I work.  Then a while back it was on sale for like $1.99 for the e-book, and so I bought it.  Plus, I got an ARC of the 3rd book, Emerald Green, so now I had a reason to go ahead and get it read!  And with doing my November is for Novellas Challenge, I've pretty much only read books on my Nook between the challenge and the e-galleys I needed to read before they expired, so this fell into that category.  Let me say that I wasn't really disappointed, the story was really good, one that you don't want to put down.  In fact, yesterday on my lunch break I got to where there were only 15 pages left in the book, but I had to put it down and go back to work.  I was not happy.
Okay, the first thing I want to get out of the way is the only negative I have.  And what that is, well, it is the science teacher in me again.  I have always read, or seen in movies, or just figured that anything that changed something in the past, would automatically change the future.  The whole Butterfly Effect, you know?  And honestly, I don't really see that happening in this story.  Something that happens in all the time travel stories, Back to the Future, The Time Machine, A Sound of Thunder.  I think it was even alluded to in Looper.  So, moving past that point, I did really like the story like I said earlier.  But this one thing is what kept me from giving it a 5 star review on Goodreads.
The story is about Gwyneth, and her perfect cousin Charlotte.  They come from a family of time travelers.  Well, not everyone, there is one in each generation it seems.  It was both Gwyneth and Charlotte's aunt Lucy who was the time traveler.  Now it seems that Charlotte is supposed to be the one who will carry the gene for time traveling, as she was born on the right day.  A day that supposedly Isaac Newton had calculated.  Gwyneth was born the day after, and so hasn't been raised like Charlotte, with lessons to prepare for traveling to different time periods by learning history, or different countries by learning languages, and even learning fencing and other self defense strategies.  But on the day that it seems will probably be Charlotte's first day to travel, Gwyneth seems to be having the sympathetic dizziness and queasiness that Charlotte is told will signify her first time travel.  But until she has actually traveled, they can't get her registered into the Chronograph which will help to control when and where and how long they time travel for.  Well, as you might guess, Gwyneth turns out to be the one who does the time traveling.  So now she has to make up for all the years of not being trained, and her mother has some explaining to do on how this could be.  Now, I didn't mention yet, but her Aunt Lucy stole the chronograph and ran back into the past with one of the other family's time travelers.  Now the other family, the de Villiers seem to have the male heirs.  In this time it is Gideon, who is a few years older than Gwyneth.  And at first, he seems pretty stuck up and condescending to her.  After all, she's not been trained, he doesn't know her like he knows Charlotte, and Gwyneth has always seemed like one of the silly girls he went to school with.  So now Gwyneth must travel in time to do the missions that will complete the 2nd chronograph, without the training, and with someone who seems to have no respect for her.
Again, I really enjoyed the story.  One very neat thing, is that this was originally in German, and has been translated.  And I guess in German speaking countries it is a very popular series.  So now I'm going to get the sequel, Sapphire Blue, from the library, so I can go on to read my ARC of Emerald Green.
Posted by Lisa Mandina at 4:59 PM