November is for Novellas Challenge #9: Life Before Legend (Legend #0.5) by Marie Lu

This was a fun way to see some of the things that made the characters the people they are in the book. 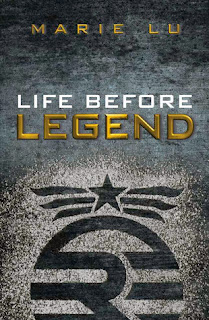 Although I would love to have a book that tells how the country got to the state it is in.  You know, more than just the explanations we get in the books.  This novella is actually two stories.  One about Day's first kiss, which also happens to be June's first day at the Academy.  In Day's story we are learning what life was like for him shortly after he'd escaped from "failing" his exam.  He's living on the streets, mostly by stealing food when he can.  Well, he tries to set up a distraction to steal some cans of food from a shipment. But he's caught, by a girl a few years older than him.  It seems it is her father's shipment.  She offers him the chance to work to make up for trying to steal, and she promises to pay him with a can of food for each day he works.  Day grows to like working there, but he must not stay as he can't be found.  Finally after a big event causes trouble for the girl's father, he begins to see more the way he can fight, but still he must leave, and he does.  It is this big event that actually is the beginning of June's story.  June is on her way to the first day at the academy, but the traffic is held up because of a truck and something going on in the road in their way.  Once June gets there, of course she is much younger than the other students, and right away there is one big bully that picks on her.  But she stand up for herself, not by fighting, but by not backing down.  She still gets in trouble, but does gain respect from the other students who are pleased to see someone else deal with the bully.  But she sees right away she isn't going to make friends, the age difference is just too much between teenagers.
All in all, a fun look at some background stories.  Hey, you've got less than a week to join into my November is for Novellas Challenge yourself.  But, it's only 4 that you need to read, and I'm sure anyone can do that over Thanksgiving break, right?
Posted by Lisa Mandina at 10:00 AM