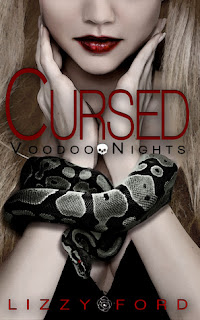 First I have to say thanks to Netgalley and Indie Ink Publishing for allowing me to read an e-galley of this.  I was of course first drawn to it by the cover, and then the description was intriguing, there aren't as many books about voodoo out there, so I thought it would be a different thing to read.  And now with this season of American Horror Story having voodoo in it, I can see that this book could be a big hit!
There are really two main characters:  Adrienne and Jayden.  Jayden's family on his mother's side are really big into voodoo.  But Jayden doesn't believe all that stuff.  He lives with his father, a man who is kind of the black Steve Jobs.  A whiz at computers.  And very wealthy.  Adrienne has a similar family, her mother's side is very into voodoo.  But she has come to live with her father, who while he isn't into voodoo, definitely respects it.  Adrienne has the power to read Tarot cards, and so works at a psychics parlor. This is the first place she and Jayden come into contact (sort of).  She does a reading for Jayden's sister Tara, and has these extra cards that are for the person Tara came with.  But she doesn't ever go out and actually see Jayden.  Adrienne has come to this fancy school on a scholarship for her singing.  She is also there to maybe find out what happened to her sister who disappeared, possibly died, 5 years ago.  When Jayden first hears Adrienne singing at school he stops to see her and is smitten.  But both of them have curses on their families.  The oldest child in each generation dies.  For Adrienne it was her older sister, for Jayden, it would be him, but the curse was only for the first 99, and he is the 100th oldest child.  But his grandmother warns him of a white zombie girl that he needs to watch out for.  And when she meets Adrienne, she thinks it is her.  Jayden has an ex-girlfriend that tries to put hexes on him.  She also is a "mean girl" and plans a prank on Adrienne, but not only that, hexes her.
The story behind the curses is very intriguing.  What happened in Jayden's past is pretty horrific, something his ancestor was a part of.  I only wish maybe there was a bit more of some specifics about the actual rituals.  But it is still interesting to hear about the gods that they pray to and believe in.  The book does leave off quite suddenly.  So I will be interested to see where it goes next.  An interesting read for sure, and you do care about the characters.  One thing that would have been nice is if they had put the eyes of the girl on the cover.  There are so many times her eyes are described, that it would be a really neat cover if you added that.
Posted by Lisa Mandina at 10:00 AM