November is for Novellas Challenge #1 and #2: The Department of Alterations and The Rain is a Lie by Gennifer Albin

These are two e-galleys that I purchased with my birthday gift card, and also are part of my November is for Novellas Challenge.  Since they go with the same series, and were both pretty short, I'm going to review them together. 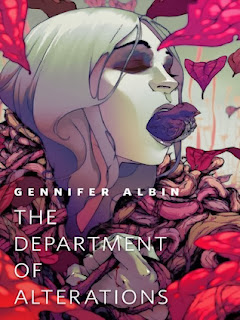 A really quick read.  You get a glimpse into what life is like in this world.  The main character is Karoline Swander and she is married to a really important man.  But for some reason they are unable to have children.  It is assumed it is her fault, as her husband will not go and get tested.  There is a way, it is illegal, but she can go and have herself "altered", and while it is a very dangerous procedure, if it works she will have the baby she wants.  Now, of course we're not ever quite told what this procedure will do, so I wonder, does it change her so that she can have a baby.  Or is it going to just change her so that she is already pregnant?  It doesn't sound like she has a great marriage, and as is expected for a dystopian type of story, the ending is not a happy one. 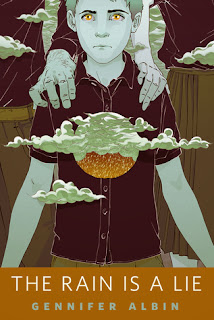 Also a quick read, but even more confusing in a way than the first one.  As we learned in Crewel the weather is controlled by the Spinsters.  And for some reason there seems to be a big 12 hour storm, right before an election.  Why this is such a big deal, I'm not sure, other than all the mud or something.  The main character is James, the boy I assume is on the cover, and at the train station one day he sees a man carving something into one of the benches.  When he goes over to see what was being done, it says, "The rain is a lie."  As you would assume, that makes no sense to James either.  But then the next day, after listening to his mother and others complain about the rain all the day before, when he goes outside it is as if there was no rain.  And his mother tells him he's wrong when he asks why there is no mud.  An abrupt ending in this one, and I'm left as confused as the beginning.

So did these short stories add to the series?  Not a lot, but it is still interesting to read about the "every day" people and how these spinsters affect them, after we've mostly learned about the spinsters so far.