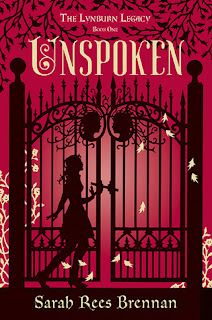 First off, let me say, this book was sooooo good!  Thanks to Netgalley and Random House Children's Books for letting me read an egalley of this.  I read this in April, and as I read it I was just going over and over in my head what I was going to say in the review, and then I was disappointed when I realized no one would get to see this information for about 4 months since it is going to be published in September.  So let the gushing begin!

I love, love, loved the characters in this book.  The banter between them, etc.  It reminds me a lot of Spellbound by Cara Lynn Schultz.  The way the characters talked to each other is just so much like how I talk with my friends and family.  I love the sense of humor, the snark, the sarcasm.  The story was good too, don't get me wrong, but it was the characters that pulled me in, made me laugh out loud, and keep coming back.  There was a cliffhanger ending, which I guess makes sense because this is going to be a series.  But I think it's okay if sometimes books don't have such huge cliffhangers.  My favorite series, Twilight, ends each book so that it could be the end.  At least I felt like it did.  And I don't know if I'm actually very happy about the way it ended, but because of other somewhat similar situations earlier in the book, I know I have to read on, because hopefully, it will get back to where I want it to be.  Where I loved the characters.

Our main character is Kami Glass who is part Asian, and a bit different from the other people in her small town in England.  Although, a lot of the way the book is, I would forget I was reading about England, that it wasn't just a small town in the USA.  And I think that's good too.  Anyway, there is a mysterious family, called the Lynburns, that have the huge mansion, and used to "run" the town in the way that rich families seem to do in small towns.  Yet they've been gone for a long time.  Kami also has a kind of unique quirk, she seems to hear someone talking in her head.  Someone she says is still her imaginary friend, that she's had forever, she's never outgrown him, Jared.  When the Lynburns come back to town, one of them a boy her age named Jared, it seems her imaginary friend may not be so imaginary.  She soon learns there is magic in this town.  And that there is a sordid history of the people in the town.  And there are people getting hurt, including Kami.  She forms a friendship both with Jared, and his cousin Ash, the other younger Lynburn back in town.  The adults in the Lynburn family aren't quite as friendly.  Kami thinks of herself as quite the Nancy Drew.  And as she starts a school paper with her friend Angela, she sets out to figure out the mysteries of her small town, Sorry in the Vale.

I loved the relationship between Kami and Jared mostly.  Although I don't understand why exactly he didn't want to touch her.  Maybe I missed how bad it was for them to feel each other's emotions that way.  I like Angela, she amused me to no end.  Such a great story, and I can't wait to read part two, but realized with the first book not even actually published yet, it will be awhile.  Maybe I can find book 2 on Netgalley as well next spring.

My only real complaint is the cover of the book.  And after reading the author's note/acknowledgement at the end of the egalley, I'm a bit afraid to say anything.  The cover just seems a bit childish for a teen book.  Off the top of my head I can't think of what more middle grades age book it reminds me of, but it just doesn't seem to fit in with the covers I see in the Teen sections these days.  It's not bad, just seems a bit immature.  Who knows, I could be crazy.  And it's not like I definitely want it to be one of those covers with the girls in the sweeping formal dresses, just doesn't work that great for me.
Posted by Lisa Mandina at 12:30 AM