I'm so excited to get to be a part of this awesome tour!  I've been telling people that authors are my rockstars for such a long time!  Probably since I first joined into the whole Twitter and blogging universe, and got to talk to them, and even occasionally meet some of them!  When I was notified that I got to host Gina Damico, I was really excited!  I'd tried for awhile to win her book on Goodreads.com, but never won.  Then I got to meet her at BEA this summer, and get the book autographed!  I had put off reading it, as I kind of set up a little schedule with trying to read ARCs before they came out.  But when I found out I was hosting her, I picked Croak right up to read.  And I LOVED it!  You can read my review here.  I got a top 5 list from Gina to share with you, I hope you enjoy it!! 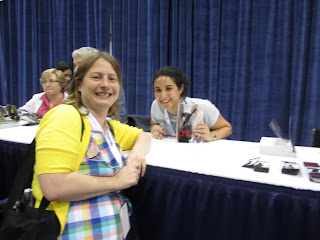 All summer long, I've been working on the third and final book in the Croak series. It's been wonderful and fun and difficult all at the same time (emphasis on the difficult when my house decides to turn itself into a sauna), but lately I've been thinking about how I used to spend my summers when I was a kid: not writing, but reading. More specifically, going to the library and checking out the same books over and over and over until the librarian had to call pry them out of my freakishly strong little hands. So here are the top five picture books I loved as a kid, in no particular order:

-Herman the Helper, by Robert Kraus
This charming little ditty is about an octopus named Herman who loves to help. It's his favorite thing ever. Get stuck in a web of seaweed? Herman'll help you out. Ocean traffic jam? Herman will use all of his legs to direct traffic. DWI charge? Herman's the best lawyer there is. (There is a chance I'm remembering this story wrong.)

-Did I Ever Tell You How Lucky You Are? by Dr. Seuss
This is one of those books that I loved so hard, I memorized it. Which is a difficult thing to do with a Dr. Seuss book, in my opinion, with all those made-up words. It's a gorgeously drawn book that tells you that even if you are stuck in a desert and sitting atop a cactus (as a wiser cactus-sitter is telling our narrator), there's a whole bunch of crap that can happen to you that's a whole lot worse. Like poor Mr. Bix - every morning at six, poor Mr. Bix has his Borfin to fix!

-Peter and the Penny Tree, by Thomas James
I'm not sure this was one of my favorites, actually, but it definitely was the first book I ever read. I was only three at the time, and I remember sitting at the kitchen table while my mom was drying dishes or something, and I was looking at the book, and then the words just came plopping out of my mouth. Mom freaked out and I got scared. But then once I realized what was happening we all had a hearty laugh and a celebratory round of Goldfish. Thus began my career of reading and getting paid in processed cheese snacks. My book advance consisted solely of Doritos!

-Chicka Chicka Boom Boom, by Bill Martin, Jr. and John Archambault
The story is about how all the letters of the alphabet get together to climb up a coconut tree, and then it gets a little too crowded up there and they all fall out - which, now that I am seeing that all typed out, is actually pretty horrible. But I dare you to read this book  and not start saying "Chicka chicka boom boom" to yourself for the rest of the day, or perhaps the rest of the month, driving anyone within hearing range to insanity with your nonsensical ramblings.

-Alexander and the Terrible, Horrible, No Good, Very Bad Day, by Judith Viorst
I know I'm not alone in loving this book, and I think it's because kids are just so darn convinced that they are constantly going through the worst possible things that could happen to them, when meanwhile they have no idea how much harder life is going to get. Hey Alexander, I bet you'll stop whining about the ice cream that fell off your cone once you get audited by the IRS. Good luck whining your way out of THAT one. Sure, you can move to Australia like you keep threatening, but you know what? THEY WILL FIND YOU.

I have to say I definitely agree with the last book on that list.  It is one of my favorite books EVER!  I find myself quoting lines from it even when I'm having a bad day.

And in going with the top 5 list and the theme of these books, I've created my own top 5 Grim Reapers list, like above, in no particular order.

And to all of you out there, let me say that I wish I could enter the contest I'm sponsoring today!!  Gina Damico is offering a copy of the 2nd book in her Croak series, called Scorch.  A book I really can't wait to read now!  So, make sure you enter the giveaway below, so you can be the lucky owner of this book.  And it is open to US entries only.

Check out the rest of the Authors Are Rockstars Tour HERE.
Posted by Lisa Mandina at 12:01 AM