Beyond by Graham McNamee 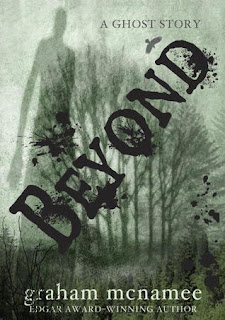 First, thanks to Netgalley and Random House Children's Books for allowing me to read an egalley of this over the summer.  This is the first book from this author that I've read.  And it was really good.  It was a ghost story, but had a very unique take on the whole ghost thing.  A very creepy one!  The main character is Jane, and she is haunted.  Only, she doesn't know that it's a ghost, all she can tell is that her shadow seems to have it out for her.  Things keep happening to her, life threatening things, that seem like she is trying to kill herself.  Although she's not, she can kind of say her shadow made her do it, but she can't.  Because who would believe that?  Well, fortunately for Jane, she has a best friend named Lexi, and together, they call themselves the Creep sisters, because everyone thinks they're weird.  Lexi is a good friend, she believes Jane, and has even seen some evidence to help back Jane's story up.  Jane's whole life has been a series of almost near death experiences it seems.  She even almost didn't make it when she was born.  When she was about 8 she drank poison.  A little bit older she grabbed a live wire after a storm and electrocuted herself.  She almost got ran over on a train track, and what we've just joined in the story after, is she's shot herself in the head with a nail gun.  She has a nail in her head.  And Jane is wondering if this is causing her link to her shadow, or maybe a ghost as she and Lexi research online, to be stronger.  She's also started getting flashbacks of people and events that she doesn't know, or aren't her memories.  And this is when the ghost theory starts in. And if it is a ghost, why does he want to kill Jane?

The whole shadow thing was a new idea for me, and it was very creepy!  I can totally see this as a book my students would like.  The "romance" of the story was very realistic seeming to me.It was a good story, can't wait to have it at the bookstore and recommend it to teens looking for ghost stories.  It seems there aren't as many plain ghost stories for teens, without all the paranormal romance stuff.  (Don't get me wrong, I do like those too).  And this will fit that niche perfectly!
Posted by Lisa Mandina at 3:00 AM