I was going to do all of my past due audiobook reviews in one big mini-review post, but then I got the opportunity to listen to Worth the Risk and thought it deserved to be reviewed just with the other books in the Everyday Heroes series.  Kind of weird, but I actually listened to book 2 in the series, Combust first, and you can read that review HERE.  Each book can be read as a standalone, but since they are about the Malone brothers, they are all interconnected, and each one will make you want to read the others to find out about the brothers you meet. 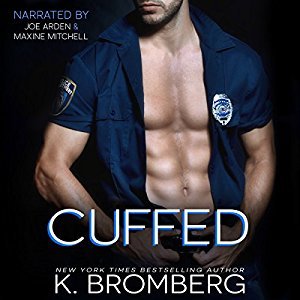 Synopsis:
“I hate you. I never want to see you again.”Grant Malone is not the reason I moved back to Sunnyville—at least that’s what I tell myself. Yet, those parting words I said to him back in third grade, ring in my ears every time a townsperson brings up one of the Malone boys. I thought time had healed my wounds. I was wrong. Nothing could have prepared me for how I felt when I finally saw him again.Twenty years does a lot to turn a boy into a man. One who hits all my buttons—sexy, funny, attractive, and a police officer. But Grant is off limits because he knows too much about my past.But I’m drawn to him. That damn uniform of his doesn’t hurt either. It’ll be my downfall. I know it.What’s one night of sex going to hurt . . . right?***I’ve always loved Emmy Reeves.That’s why I’m shocked to see her all these years later. The shy girl I once knew is all grown up.Adventurous and full of life, she owns my heart now, just as much as she did back then. Convincing her of that is a whole different story.I’ll give her the one night she asks for—like that’s a hardship—but when it comes to letting her walk away after, she has another thing coming. There’s no way in hell I’m letting her go this time without a fight.
My Review:
This book, once again Bromberg emotionally rings me out with her story!  I cried!  Something I should expect with all of her books it seems.  But this one had such an intense back story, and such a heart-breaking case that Grant is on as a cop.  Of course his case is similar to what Emmy's past was, the thing that sent her away from her friend Grant.  Emmy fought so hard against getting back with him, and it was hard not to empathize with her and her past.  But it was so wonderful to see how hard Grant fought for her.  There was something at the very beginning that I just knew would come into play later in the book to cause an obstacle for them.  I learned a new term for friends with benefits, banging buddies, hadn't heard that one before!  Since I'd already read/listened to book 2, I already knew Grady, but I kinda want to go back and reread/listen to hear things that might make more sense after getting this first one read.  And while there was a short time in my life I thought I'd like to skydive, I've since decided I don't want to. But then, the rush that they talk about afterwards?  Well, I kinda want to experience it just once!

I had actually won a physical copy of the book from the author, on Facebook I think, but I listened to the audiobook instead.  As I seem to do with all of Bromberg's books.

Worth the Risk (Everyday Heroes #3): 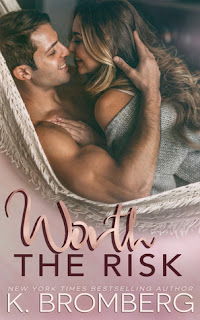 Release Date:  May 15th, 2018 Source:  Audiobook gifted through Audible.com from author which did not affect my opinion. My rating:  5 stars

Synopsis:
This whole contest was supposed to be easy. I know, I know. Famous last words.

It’s a long story, but I messed up at work. Big time. To earn back the trust of my boss, I promised to save one of our magazines. Yep. That Hot Dad contest you’ve seen advertised all over the place was my idea. And if I’m successful, if I’m able to increase our online readership, then I get a shot at my dream job.

But the one thing I never expected to happen, happened: Contestant number ten, Grayson Malone. Hello, Mr. Difficult. And did I mention sexy as hell?

Unfortunately he knows me. The old me, anyway. And while we might be older now, I remind him of before. Of the woman who broke his heart, who hardened him, and who left him alone to raise the cutest little boy I’ve ever seen.

But I don’t want a relationship. And I definitely don’t fall for single dads with baggage. Even ones with chiseled abs and killer smiles.

But he got to me. They got to me. Him and his son and their messy, crazy life. But I got to him too. I see the stolen glances. I feel the walls he built start to crumble. I recognize that there’s an unexpected beauty to the chaos in his life.

And now that the contest is about to end, we’re left to decide whether the last six months were just fun or if what we have is worth risking it all?

My Review:
Now first off, the cover doesn't match the first two in the series.  And I get why the author changed, although honestly, since there was the hot dad contest that Grayson was in, the original cover would still have worked in my opinion.  I have to say after reading/listening to this one though, it is probably my favorite. And the reason for that is that Luke, Grayson's 8 year old son, totally steals the story/show/book.  He made me cry whenever he asked his dad about getting him a mom, made me laugh with his talk about innies and outies, and I smiled so much when he asked Sidney to go the picnic with him and his grandma.  In fact I was a little disappointed that the little epilogue didn't actually have him in it really.

It took a bit of time, almost halfway through the book before we got into any steamy stuff though, but once we did, it was the usual good stuff from this author.  Even when Grayson and Sidney tried to keep telling each other it was only a sexual/friends with benefits relationship, you could tell how much each wanted more than that.  I was so mad that Sidney never said anything about how if she helped save this magazine she'd be getting her own magazine to run.  Although I feel like Grayson should have realized that.  And in a way, he did, only he was just assuming she was just like his ex and would leave.  But then when she showed in so many ways that she was different from his ex, he made me so mad for not giving her a chance!  For not asking her to stay, for not telling her that he chose her!

As much as I loved Luke, and that he totally made the book over the top perfect for me, I also feel like we got so much more interaction with all three of the Malone brothers in this book.  Not that we didn't have them before, but I just feel like this one had more of them.  The three of them together was so much fun.  I loved how they teased and tortured one another.  Of course you have to adore their mother and how she just wants to get all her boys hooked up.  But then I loved how his father really was a great influence in this one.  I also like how Sidney's father was at the end too.

Such a great wrap-up to such a great series, but a series of standalones, that can be read in any order and as far apart as you want.  Although if you get the time, and you can, I'd suggest listening/reading them all right in a row!