Delaney might have done her job a little TOO well…and now her life has once again been turned upside down by aliens, this time by a deadly (and devastatingly handsome) alien prince in this explosive second installment of Chani Lynn Feener’s The Xenith Trilogy.

Delaney has been kidnapped by aliens. Again. After only a month back on Earth with her hot new alien boyfriend Ruckus, the deadly and devastatingly handsome prince Trystan has dragged her right back to his planet.

While some girls may dream of winning a prince’s heart, Delaney just wishes this one would leave her alone. Instead, she finds herself at the center of both a tense political battle between two alien kingdoms and Trystan’s romantic attentions, both of which are absolutely ruining the life she’s built on Earth. Not to mention the fact that she’s about to be crowned queen of a planet she’s barely even visited. Just another day in the life of an ordinary human girl.

Readers won’t want to miss Between Frost and Fury, the compelling, fast-paced sequel to Chani Lynn Feener’s Amid Stars and Darkness.

Goodreads / Amazon / Barnes & Noble / iBooks / Kobo
Author Interview:
1.  What does your writing process look like? Do you know the whole story when you start?  Or do you just start writing and go with it (seat of the pants writing)?  If you plan it out, how do you do that?  Outline, notecards, post-it-notes, etc.?

I’m definitely a by the seat of your pants writer, or Pantser. I don’t really know much about any book before I start it, just a general idea or concept. The most I try to have is the main characters name, and possibly even the love interests’ name. Aside from that, I like to be surprised as I go and let the characters tell me what happens instead of the other way around.

I mostly wait until I’ve finished the book to do any major editing, since a lot of the time I don’t know what’s going to happen, so by the end there are specific details or things that need to be added in to make the story flow. Once I’ve got the first draft, I’ll read it through once and then I need someone else to take it from there. I tend to miss a lot of basic edits, small things, because I’m so immersed in getting the plot and character details right I don’t notice them.

I’ve been a part of one or two in the past, but I’m not currently. I’m a really fast worker, so I like to have a first draft completed within a month (sometimes it’s more like 6 weeks, sometimes 8. It depends on the project), so generally by the time the group meets up again, I’ve written more than they can or want to follow.

Lots of different ways. Sometimes I’ll see something and an idea will just hit me. Other times it’s from watching a show or movie, or from reading a book. Once in a while it’s from nothing at all, and a character will just sort of come to me and I’ll be like, “Hey, you seem interesting, who are you” and go from there.

5.  How important are names in your books?  Do you choose the names based on liking the way it sounds, or the meaning?  Do you have any name choosing resources you recommend?

Very important! I typically try and choose names based on meaning, though there are times where I’ll just love the way a name sounds so much, I’ll have to stick with it instead. That was the case for most of the names in the Xenith trilogy, since they were “alien” and there was a pattern to them (Vakar male names ending in US and Kint male names ending in AN, for example). Because of that it made it too tricky to try and choose names based on meaning, but for practically everything else I’ve ever written, that’s something I tend to do. I don’t really have any set resources…I’ve got a notebook filled with names with their meanings that I researched to make it easier. Other times I’ll just type it into Google, like, “Names meaning sun” etc.

6.   What are your favorite:
Books/authors/genres
My favorite books are The Road by Cormac McCarthy, Life of Pi by Yann Martel, and The Raven Cycle by Maggie Steifvater. I read most genres—except for western novels, and middle grade—so I don’t really have a favorite, per say. Though I do prefer Fiction over Non Fiction for the most part.
Movies/TV Shows
I watch way too many movies and shows to really give a straight answer to this. I’m a huge Buffy the Vampire Slayer fan still, and I loved Netflix’s Sense8. The Flash, The 100, Agents of SHIELD, and Blindspot are a few others I really enjoy. As far as movies…Not Another Happy Ending, Now is Good, and IT (the recent version) are ones I can almost always put on.
Music
I probably listen to more music than I do watch movies or tv shows so this is even harder to answer. I’m actually a huge BTS and Ed Sheeran fan though. But I don’t have a favorite genre, and I listen to pretty much everything.
Food/Writing snack
My favorite food is pot stickers (or pizza, because…pizza). I love pot stickers. My favorite writing snack is either pretzels or seaweed. 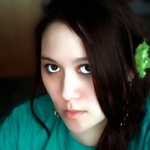 Chani Lynn Feener has wanted to be a writer since the age of ten during fifth grade story time. She majored in Creative Writing at Johnson State College in Vermont, and graduated in 2012. To pay her bills, she has worked many odd jobs, including, but not limited to, telemarketing, order picking in a warehouse, and filling ink cartridges. When she isn’t writing, she’s binging TV shows, drawing, or frequenting zoos/aquariums. Chani is also the author of teen paranormal series, the Underworld Saga, originally written under the penname Tempest C. Avery. She currently resides in Connecticut, but lives on Goodreads.com.