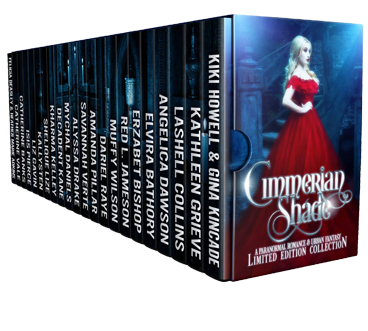 
Dare to discover what lurks in the shadows in **New and Exclusive** paranormal and urban fantasy stories from your favorite NY Times, USA Today, and International Bestselling authors.
Under moonlit skies, witches, werewolves, vampires, demons, dragons, and more, battle not only for their mates, but to stay alive…
Fall for the alphas who play by their own rules despite the odds, whether century-old curses or forbidden love, or worse. For them, what lies in the darkness is worth the fight when it comes to romance.

Kyna must battle dark magic and secret societies, deal with kidnappings and satanic weddings, as she struggles not to lose her heart to one of two men—a former Navy SEAL hired to protect her or a wizard hired to train her. Soon she will realize just how true it is that “What lies behind us and what lies before us are tiny matters compared to what lies within us.”
What Lies Within Us by Kiki Howell and Gina Kincade

Inferno. The hottest paranormal nightclub in the city. Can you stand the heat?
Torch Song by Lashell Collins

Man, being a ghost sucks.”
In his stoic way, he delivered a deadpan reply. “Undeniably and indescribably.”
Ethereal Witness by Angelica Dawson

What lengths would you go to prove yourself to your family?
Love Story of a Reaper by Elvira Bathory

Her body burned for them both and the need that poured from her bloomed like the flower she thought she never could be.
Burning Midnight by Erzabet Bishop

Talk about a killer kiss.
With This Heart by Red L. Jameson

Their shared carnal voracity fanned an appetite no amount of indulgence could satisfy.
Saltwater Siren by Muffy Wilson

Drayden saved her life – but her incessant need for vengeance could mean the end of his.
Dangerous Beauty, Sexy Beast by Dariel Raye

“I’m sorry, but was someone talking about me? I thought I heard the word ‘legend’?”
Rose Tears by Amanda Pillar

Bree Brigand’s quest for the truth starts when she learns everything she knows is a lie.
Rogue by Savannah Verte

An island of secrets, a lifetime of anguish, one epic homecoming.
Hexing Hearts by Alyssa Drake

“I don’t know what you’ve heard about me, but I’m not in that sort of business. I’m a concierge, not a concubine!”
Dragons Curvy Concierge by Mychal Daniels

Magic doesn’t bind you to a dragon without a reason.
Credence – Moon Dragons by Decadent Kane

“Tristan had other women grace his bed, but none quite like this one. He had to hand it to whomever had delivered her to him, she definitely was Satan in a beautiful, Sunday hat.”
Kiss of the Fallen by Kharma Kelley

Pan leans down against me and whispers against my cheek, “Tears of a goddess.” His deep, riveting whisper is tantalizing. Qualm tickles under my skin with his admiration. “Forgive me, but I’m finding your tears utterly captivating.”
Selene by Shelique Lize

Dealing with vampires and demons? Piece of cake. Dealing with the ex he still loves? Not so easy…
One Last Lullaby by Kallysten

I felt the angry witch’s curse spreading through my body as if a million icy fingers were taking root under my skin. I was doomed.
Lust by Liz Gavin

“One tiny spell and Samantha’s on the run for her life.”
Witch Playground by Isis Pierce

A wolf’s love is forever…and so is the bond of the pack.
Frozen Soul by Catherine Banks

The darkness will consume them if they don’t face it together.
Taste Of Darkness by Catherine Vale