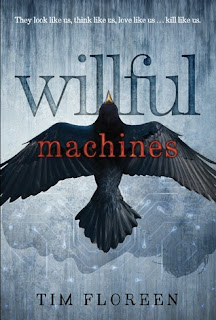 First, thanks to Simon Pulse and Edelweiss for allowing me to read an e-galley of this title.  I really enjoyed it, and feel like it was a very unique type of story, with some themes that I'm beginning to see more and more of in YA.  It was also a good science fiction story, and I really liked what we learned about how the robots worked.

The main character is Lee.  Lee's father is the President of the United States.  So he's got that to deal with.  And he is going to a prestigious school that his father went to, as well as his grandfather.  His grandfather is the headmaster of the school, and is a military veteran who is well-known for having had to kill his best friend in the enemy's prison and use his synthetic leg to get away and save himself.  This is a future story, maybe not too far ahead.  They have begun working and actually created a sentient computer.  Only that computer, named Charlotte, went a little crazy and killed someone, Lee's mother.  But somehow she escaped, into the World Wide Web possibly. And since that, Lee's father has been trying to get all kinds of laws put in place, defining what is a machine and what is human, but some of his laws are even taking back human rights, like women being discriminated against even.

Lee is having to deal with all of this, along with being a teenage boy, and being gay.  But he has to keep it a secret, as it would probably cause problems for his father.  He's always under surveillance, at least one member of the Secret Service guarding him every minute.  And then, where we begin the story, a new student has arrived at the school.  His name is Nico, and he seems to be interested in Lee.  He seems to know Lee's secret, and flirts with him.  Lee finds that he really likes Nico, and so takes many chances to be with him.  But there are still dangers.  Charlotte has threatened more terrorism, as bad or worse than her last one that destroyed the Statue of Liberty.  And while Lee has always enjoyed working with robotics, like his mother, his creations have started to turn against him.  So it seems someone, maybe Charlotte, has found a way to take them over and use them against Lee.  And all along Nico also has a secret, one that could also cause Lee even more problems.

I really liked the story. While I kind of figured out Nico's secret pretty quickly, you probably will too, there were other things that were still surprises, and kept me reading to find out what exactly was going on.  I loved all the little gadgets and robots that Lee had created.  I really liked the relationship between Nico and Lee.  It was playful and fun like any relationship between a boy and girl in a book, and I felt that was very realistic and wonderful to be able to read.  I will definitely be ordering this book for my school library, and recommend it at the bookstore where I work.  I look forward to reading more from this author.
Posted by Lisa Mandina at 9:21 AM