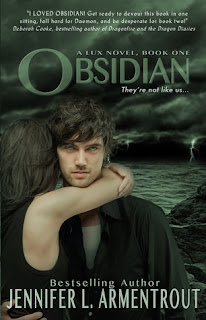 I was lucky and got this book through a Books for Trade deal on Twitter.  It came autographed even!  And, of course, as always seems to happen with every other JLA book I've picked up, I was immediately sucked in and hooked!  I took this book on my trip to New Orleans this past weekend as my book to read in the airport.  However, it was so good that there were times I wanted to sit in the room and read instead of going out to hang out and see things in New Orleans.  Enough about how much I loved it, here's a quick description of it.

The main character is Katy.  She and her mother have just moved away from their home, partly because of the death of Katy's father.  They're ready to start over.  Her mother notices two teens living right next door, so Katy goes to meet them. Right away she is struck by the extreme hotness of the guy her age who opens the door, Daemon.  But Daemon is more than just normal "hot" guy stuck up.  He is downright rude.  To the point he almost makes Katy want to cry. But as she is in town buying groceries later, she runs into his sister Dee, and she is a whole different person.  While she is just as beautiful as Daemon was handsome, she is very friendly and so excited to make a new friend.  Daemon seems intent on keeping them apart, by being as rude as he can possibly be.

Now Katy is a book blogger.  And it was so much fun reading all the detail Armentrout used in this.  Having her do Waiting on Wednesday and In My Mailbox posts, as well as getting excited about media mail!!  I probably was such a total dork when I read these things, smiling and laughing out loud, even in public!

Now soon it seems as if there is something else going on around Daemon and Dee.  The town members don't seem to like them very much.  And Katy notices other weird things.  Like Daemon staying under water much longer than what should be possible.  He is also very quiet and moves really quickly.  There are times when her friendship with Dee gets in danger, due to both Daemon, as well as Dee's other friends' interference and rudeness.  But the sexual tension between Katy and Daemon is just so obvious. Everyone in the school sees it.  Even Daemon's ex.  At one point Daemon humiliates Katy in the school cafeteria.  But she doesn't just let it go, she gets him back. And really, it's a way that only intrigues him even more.

Katy will learn the secret, Daemon and Dee are aliens, and there are other aliens that want to hurt them.  Eventually those bad aliens will be able to trace the brother and sister through Katy, putting her life in danger as well.   Daemon and Katy will have to come to terms with the tension between them, Katy not knowing exactly where Daemon is coming from, and if any of the attraction he shows is real.

The characters are once again just perfect.  Exactly like all the characters I've read so far in Armentrout's stories.  I could barely put this book down to do anything.  And the first thing I did when I got back in town from vacation was order the 2nd book in the series.  I can't wait to read on and see what will happen next between these two, as well as with these aliens and their enemies.
Posted by Lisa Mandina at 7:00 AM