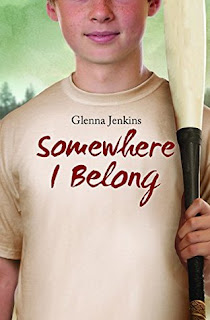 In Somewhere I Belong, we meet young P.J. Kavanaugh at North Boston Station. His father has died, the Depression is on, and his mother is moving them back home. They settle in, and P.J. makes new friends. But the P.E.I. winter is harsh, the farm chores endless, and his teacher a drunken bully. He soon wants to go home; the problem is how.

A letter arrives from Aunt Mayme announcing a Babe Ruth charity baseball game in the old neighbourhood. But Ma won’t let him go. P.J is devastated. The weeks pass, then there is an accident on the farm. P.J. becomes a hero and Ma changes her mind. He travels to Boston, sees his friends, watches Babe Ruth hit a home run, and renews his attachment to the place. But his eagerness to return to the Island makes him wonder where he really belongs.

Glenna's Website / Goodreads / LinkedIn
I am a writer, editor and indexer who lives in historic Lunenburg, Nova Scotia. A true Maritimer, I was born and raised in Nova Scotia and my Prince Edward Island roots hail back to 1830. My short stories have been published in Jilted Angels: A Collection of Short Stories (Broad Street Press), and Riptides: New Island Fiction (Acorn Press Canada), the latter which was nominated for best Atlantic book of 2012 and won the 2013 Prince Edward Island Book Award. In addition to placing first in the 2014 Atlantic Writing Competition’s literary non-fiction category, I received a mentorship from the Writers Federation of Nova Scotia to study under award-winning writer, William Kowalski. I am also a graduate of the Humber School for Writers, where I studied novel writing under two-time Governor General Award winner, David Adams Richards. My first novel, Somewhere I Belong, is based on a true story and was released on November 1, 2014 by Acorn Press Canada.
As a published author and fiction writer, I offer developmental writing services, coaching, and copy editing, structural editing to emerging writers of fiction and non-fiction in short-story, novel or book format. As an editor, I revise scholarly works written by academics whose first language is not English and who wish to complete their master’s theses, PhD dissertations, or publish in English-language academic journals. I also completed an indexing course at the University of California at Berkeley and index books on economics, politics, history, and topics of general interest.