Review: The Anatomy of Curiosity (The Curiosities #2) by Maggie Stiefvater, Tessa Gratton, and Brenna Yovanoff 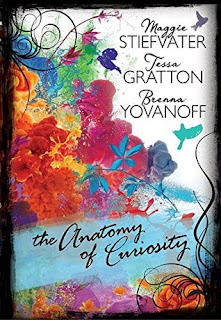 First, I have to say thank you to the publisher, Carolrhoda Books and Lerner Publishing, for sending me an ARC of this when I emailed and requested it last spring.  At first I was feeling bad that I didn't get to it until right before it was going to be published.  But as I have been starting to prepare for NaNoWriMo, reading this at the same time was really helpful!  The writing tips that each author gave either with their stories, or in the in-between sections when they'd all chime in on some writing topic, were very useful and gave me definite clues on how to work on my writing this year.  While the first Curiosities book, had more stories in it, and this one only has three, one from each author, the stories are longer, and the way they are done is more helpful in seeing the process of writing.  Each of the authors chooses one aspect of writing that they feel they are the most comfortable with to talk about with their story.  And I definitely agreed with them for the most part, based on their books that I have read.

The first story in this book is one by Stiefvater.  Stiefvater's aspect is characters.  And as I end up loving all of her books because of the wonderful characters, usually as my favorite part, I will definitely agree that she is very strong with this.  Her story is about an old woman, who is something more than an old woman, something dangerous maybe.  The other main character is a teen girl who has been asked to go sit and read to the old woman, that it will make her happy.  Her daughters ask her to do this.  There is something strange about the whole situation, but the girl, Petra, feels very comfortable with the woman, Geraldine.  While Petra tries at times to figure out Geraldine's secrets, they stay pretty well hidden.  Until one day when there is another person in Geraldine's home, a boy, one that doesn't look a lot older than Petra, but still is a little older.  Petra has no idea why this boy is there.  He is just sitting by the door every times she shows up. Soon enough his presence will lead to secrets being blown out into the open, and Petra will learn about who she really is.  Stiefvater goes on to point out parts in the story and how they add to the character, and she will mention at those points what things could be done differently, and sometimes why she doesn't do them that way.  I'm so excited to try out some of her tips while I write my story this November.

The second story is all about world building, and the expert this time is Tessa Gratton.  If you have read any of her books, I think you will definitely agree with this.  Especially her United States of Asgard books.  In fact, I'm hesitant to read Riordan's new book because of how much I loved the world Gratton built using the same types of myths.  Gratton's story has to do with a kind of alternate world where magic exists.  In this world there has been a war, and the terrorists are able to set up bombs using magic.  The world is so different from ours.  In one of the main character's worlds woman are in charge.  This is the world of Rafel.  He is in the military, and gets sent out to help find and defuse these magical bombs, and each person must work with one of the magic people of a tribe that lives in between the warring lands, and the person he gets matched up with is Aniv.  It is the women in Aniv's culture that have the magic and are able to do the defusing.  After working together, Rafel begins to have feelings for Aniv.  But Aniv has more of a secret, one that may change the way Rafel looks at her and change his world.  A beautiful world created here by Gratton, but I do have to point out that she also creates great characters.  One thing she does talk about with her characters in the little tips she puts throughout the story is how they will help promote the theme and build the world.  While I'm still a little unsure how to come up with such vivid worlds, I have some ideas now on how to use the other parts of my writing to help develop the world.

The final story is from Brenna Yovanoff.  She talks about ideas.  What to do with them?  How do her ideas start?  Are they the same in the final story?  Her section is done a little differently from the first two.  She doesn't just write the story and give us tips along the way.  There is a story, and it does have tips along the way, but she also does some different bits at the beginning.  Gratton talks about how something that happened to her when she was young has always kind of rolled around in her brain giving ideas about possible stories.  She shared an original type of story written about this experience, and throughout it pointed out things that she had changed and why or how she had changed them. Then we get the more final copy of the story, and after that she points out how the things were changed between the two, and why she feels the changes worked.  I feel Yovanoff's part may not have had some of the more solid tips about how to write specifically.  But, that doesn't mean her part was any less useful.  Reading how she went through the realization of an idea from start to finally getting it into the story, and all the different steps in between, that is very helpful.  Seeing her talk about how parts, big parts, were just completely tossed out and changed as she went through this story definitely helped me when I'm writing to know that I need to just get things down, and go back and then fix the things that don't work.  And that it's okay if parts don't work, that doesn't mean the whole story is bad and has to be thrown out.

Such a great book for anyone who wants help with their writing or maybe gets what they feel is writer's block.  I will be sharing it with all my friends who are writers, as well as with students at my school who are writers themselves.
Posted by Lisa Mandina at 7:00 AM