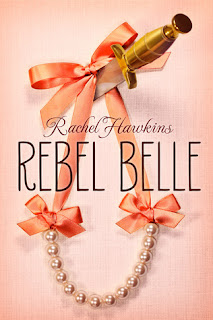 I decided to download this as an audiobook from the library because some of the other books I'd wanted I had to be on a waiting list. And then I remembered I'd wanted to read this one.  It was definitely a good choice on my part!  I really enjoyed it!  As someone who is a huge Buffy the Vampire Slayer fan, the book really reminded me so much of the original BTVS movie.  Obviously it wasn't the exact same story, no vampires for one thing.  But a girl gets powers, has to protect someone, she has to hide her powers and new life from her boyfriend, and the big fight is going to go down at a formal dress event.  Those are the main similarities.  And what was even funny was that the book even referenced the BTVS tv show!  When the main character got her powers, she was wondering where her "Giles" was.

The main character is Harper, such a perfect southern belle name.  And Harper is the perfect southern belle.  She is a proper lady, has the best guy in school for her boyfriend, she's popular - but not mean girl popular, her family history in the town is well-set, and she runs so many things at school - and works hard to make her school the best it can be.  She has a boy, David, who has been her arch-nemesis since grade school.  They're both at the top of the class, and he's on the school newspaper, always seeming to write articles that show her in a bad light to the rest of the school.  The story begins the night of Homecoming.  Harper shows up kind of late with her boyfriend Ryan, and her best friend Bee and her boyfriend, Brandon.  When she realizes she forgot to put on any lip gloss, she hurries to the girls' restroom to put some on.  Unfortunately while she's in there, the janitor comes stumbling in, and shuts and locks the door.  Harper notices he's bleeding, and before she can get away, he holds onto her and blows something into her mouth.  Then he dies.  There is some pounding on the door, and her history teacher breaks in brandishing a scimitar.  All of a sudden Harper has this strange power and knows how to fight, and she ends up having to fight and kill the history teacher.  She finally is able to escape, without getting any blood on herself somehow.  And out in the hallway she runs into David.  She's worried she'll be arrested for killing her teacher.  But when she goes back to the bathroom later, everything that was in there is gone.

She soon finds out that she's unable to hurt David, but whenever he is in danger, she gets this horrible feeling inside, a noise in her head, and she has to go to protect him wherever and however.  Together they begin to try to figure out what is going on. The janitor has called her a "Paladin"and they look up what that is.  They go to ask David's aunt about it, and find out that David is an Oracle, and his aunt, isn't really his aunt, but a Mage.  Someone who can do magic that has been raising him, protecting him from the other Mages who want to kill him, because a male Oracle isn't as powerful as a female one, and so that's why they are rarely allowed to live very long.  The big vision that David has seen includes blood and mayhem at the winter cotillion that Harper is supposed to be attending, and that his aunt is in charge of.  Of course all this secretive behavior and meetings sets up rumors and gossip.  Harper's boyfriend and best friend wonder what she is up to, and it leads to problems with their relationships.  So Harper wants her life to not change, but she must protect David.  And she must survive the night of the cotillion.

As I wrote this review, again I wanted to keep comparing to the BTVS movie.  And it's not in a bad way at all, because I loved the movie, and the tv show, and I loved this book.  Probably the only reason I gave the book a 4 instead of a 5 is because of how much it seems like the same story in a way.  What I loved about this story though, is that even though Harper has problems with her boyfriend, unlike in the BTVS movie, this boyfriend is a wonderful southern gentleman, and really just a nice guy.  I like the way he is realistically written as a teen boy, but still able to be a nice guy, and not a jerk.  And the best friend isn't a jerk like in the movie, Bee actually is able to stay friends and be loyal. Now the other girls in the crowd, that's another story, but that is normal for a group of popular girls as well.  I like that while Harper notices her feelings to Ryan changing, and notices that maybe he's starting to feel something for Mary Beth, she is adult enough to realize that he isn't cheating on her, but still a teenager in that she doesn't quite want to give him away so easily.

Really the only problem I kind of had was picturing David.  Does anyone have a picture of what the author maybe was thinking?  I just can't quite seem to picture anything that would be even remotely attractive from the way he was described, but I know he has to be one of those guys that is nerdy on the surface, but under the glasses and horrible clothing, still cute.

I really loved this book, will have to listen to the audiobook of the 2nd one now and then review it as well.  I was also very excited to see on someone's Waiting on Wednesday post yesterday that there is going to be a third book in the series.  So that is cool, hopefully I love the 2nd one as much as the 1st, and then will be very anxious for that 3rd one.
Posted by Lisa Mandina at 11:55 AM