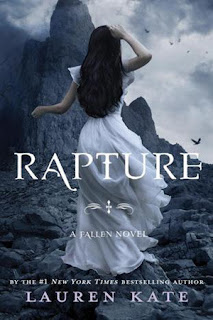 Once again I have enjoyed another audio book downloaded through my public library using the Overdrive app.  Now, I haven't been exercising like I'm supposed to be, so I pretty much listened to this whole book in my car, with a bit on the plane rides to and from New Orleans a couple weeks ago.  While I still have issues with the narrator, by this time I'm pretty used to her voice and how she does the different characters.   All in all, I feel this was a pretty great conclusion to the whole series, even though there is now going to be a book #5.  If you haven't read the books up until this point, then I'm sorry, this will have spoilers for those books.  You can go back and read any of those reviews here:  Fallen, Torment, and Passion.  Now, on for my review of this book. (Excuse any incorrect character name spellings as I didn't read, but listened, so don't know for sure some of the spellings).

As we ended the last book with a huge possible end of the world situation going to be caused by Lucifer himself, that is exactly where we pick up again.  Turns out that there are some relics that Daniel had studied that should help them figure out where the angels' fall from heaven happened.  And that is what they must do, they must find those relics and get to the site of the fall in order to stop Lucifer from grabbing all the angels and taking them straight from the fall to the current day.  Because if they did that, all of history would be rewritten, and Luce and Daniel would never have the chance to get together, even with their curse.  So the story takes place as the angels we know and love, Daniel, Cam, Roland, Arriane, Annabelle, Molly, and Gabby, as well as Luce and her Nephilim friends Miles and Shelby, set off in search of the relics, but they come up against the Scales and the Outcasts.  They will find other obstacles, places that the relics were originally may have been moved, and other villains from the past, like Miss Sophia.  They are able to use the memories that Luce is now retrieving more easily thanks to her trips through the announcers into her past lives in the last book.  They will also find some new allies, relatives of Miss Sophia, as well as those that were once considered their enemies.  And we learn so much more about Luce, about how she and Daniel actually first met, and just why Lucifer went to so much trouble as Bill in the book before this one.

While I had an inkling about the reason for Lucifer's interference, it was nice to find the way it happened was done perfectly.  Many parts that we learned about heaven and before the fall totally reminded me of the Supernatural tv series that I love so much.  And not to offend anyone, but the part where angels were created by God for the sole purpose of adoring him, well that just really hits me in my not sure about what I think about God.  Who creates something just for that sole purpose?  It is similar to adopting a kid or buying a pet with the only thought that they will be there for you, not that you are there for them?  I don't know, that just sticks in my head.  And my complaints about the audiobook have to do with the narrator.  Once again I understand she is lowering her voice for the male characters, but often the way she did Daniel made him sound like a really dumb guy.  Just the way she did the voice, not necessarily his lines or anything specifically from the book.

Overall, a great series, a great ending to the series as I said before.  I love the way the author ended it, I won't give that away, but I feel like it should be a very satisfactory ending and way to make sure that we know just how true the love between Daniel and Luce is.   I know that there is a #5, but it is going to be Cam's story, and that is something I'm eager to read.  Oh, on the end of the audio, there was an interview with the author, and it is funny that Cam is modeled on her husband, and they way she talks about that.  Now, I'm still waiting for the movie of the first book, and need to go do the research to find out when it will be coming to a theater near me!
Posted by Lisa Mandina at 10:42 AM