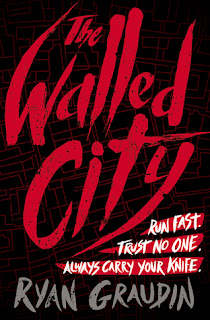 I was lucky enough to get an ARC of this when I went to BEA a year ago.  I also got to meet the author and get an autograph.  As you can see though, I didn't get to it for over a year.  So it is #11 on my TBR Challenge list for the year.  It was a pretty good book, had some definite unique parts to the story, and reading the author's note at the end about a real walled city made it even better after I was done reading it.

There are three main characters that we get the story from, and their stories are all interwoven.  First we meet Jin Ling.  Jin Ling is a girl who has disguised herself as a boy in the Walled City in order to try to find her sister who she knows was taken to be in a brothel.  Life on the streets for her is dangerous.  But she is fast, and being able to get away really is what keeps her alive.  Until she steals brand new boots from another street kid, a big bully.  As he is trying to get his boots back, and probably kill Jin Ling in the process, we meet Dai, our next character.  Dai isn't a normal kid living on his own in the Walled City.  He is there to find information about one of the biggest gangsters for the authorities outside the city.  If he can do this, he will not be thrown in jail for crimes he committed before.  A crime that ended in the death of his own brother.  He comes across Jin Ling, and decides to help her, a boy as he thinks, in order to get Jin Ling to be a runner for him, and help him get into the gangster's headquarters to get the info he needs.  It is in this headquarters, which has a brothel, that we meet the third character, Mei Yee.  She is a prostitute, but she doesn't have to be with a lot of customers as there is an ambassador that pays very well to keep her only for himself.  He treats her pretty well, other than the prostitute part, but she wants more.  And when she sees the handsome boy outside her window, Dai, she knows what she might want and what might be out there.  You may have guessed the Mei Yee is Jin Ling's sister.  But the connection isn't made until the end of the story.  Dai has 18 days, and the story is told by the days.  The last day will be New Year's Eve, when the authorities are planning a raid, and they need the info that Dai is supposed to find.

Of course there will be lots of obstacles along the way.  Jin Ling will get a very serious wound and Dai will find out that she is a girl.  But Jin Ling won't let that wound keep her from helping Dai earn his freedom from his past crimes, and it should all work out to hopefully free them all.  Mei Yee will have to deal with the danger that comes from trying to help Dai as well, only hers will be the threat of being hooked on heroin for betraying the gangster.  Not to mention that her ambassador will not be happy when he detects her thinking of someone else.

Really a good story, and I look forward to reading more by this author in the future.