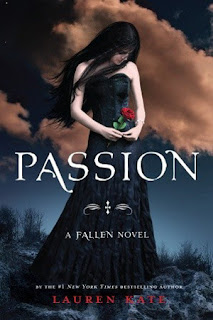 Once again I downloaded the audio book from the library to go on with this story. And I really enjoyed a lot about this next part in the series.  It was filled with so many different periods in history, which was a lot of fun.  We didn't get to see all of the characters that much in this book, other than of course Luce and Daniel, although the others did show up here and there for small parts of the story.  If you haven't read this far in the series yet, you can stop here and go back and read my review of the first book, Fallen, so that I don't give you any spoilers.

In this story we pick up right where we left off from book 2, Torment, Luce has taken off inside of an Announcer, and the others are following her, trying to find her.  Especially Daniel.  Luce is trying to understand just why do they always fall in love.  It leads to death for her every time, and horrible heartbreak for Daniel every time.  And she doesn't know just why they fell in love, or if they are just compelled to because of the curse.  And so she is going back to her past lives to try to figure out why they love each other.  Along the way she will pick up someone named Bill, a gargoyle, who is there to help her figure out what she wants to see.  She will find out in some lives she is a much different girl than she is now.  She will see Daniel in all of his different human bodies as well.  We get to see how she dies, and Luce gets to actually be inside the bodies to experience the death in some of the situations.  I loved all the reincarnations, although so many were in Europe and places other than America, even before it got into the more ancient history.  But there was World War I, and World War II.  Russia, Shakespeare's time, ancient Mayans, and the one I was beginning to wonder if they'd have, ancient Egypt.

The whole time Daniel is following her, always showing up just right after she's left it seems.  And he is just hoping that she won't do something that could mess up all of history, including their love.  In the end, they will find each other, but it will be after something horrible is about to be set in motion.  You see the devil himself will show up, and he will have something to say about this whole thing with Luce and Daniel, and his own wants.  And we'll be left waiting to find out how the gang will fight him, and whether Luce and Daniel's love will really survive, and if they can finally break the curse.

I liked it better than the first two, although there were still moments I wanted to smack Luce, and moments that Daniel was still kind of a controlling jerk.  But again, I'm so ready to read the next book and find out what happens.  Or should I say listen to the next book.  I also heard there is going to be a 5th book, told from Cam's point of view.  And does anyone know when the movie comes out?  I thought it was this fall, but I haven't seen any previews for it.
Posted by Lisa Mandina at 8:34 AM