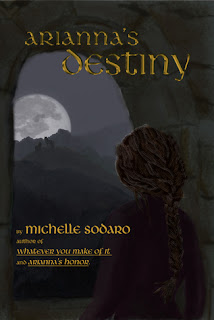 So this was the first book I read for this year's September is for Sequels Challenge.  I had planned to read it this summer actually, but then I didn't find my copy until August. So I held onto it for the challenge.  This is a sequel to the book Arianna's Honor.  My friend Michelle Sodaro is the author.  Michelle is the friend that helped me to actually finish NaNoWriMo last November.  She's the friend I plan to work with again this November on another story.  So as I said with the review of the last book, this is a hard review.  But Michelle knows how I review and blog, and so she will understand my thoughts and comments about the books I hope.  If you haven't read the first book, you should stop here, click the link above to read my review of the first one, and then go read the book before you come read this review.

Arianna is back but she's spent the time between the last book and this one off in a cabin by herself.  After the horrible things she dealt with in the last book, the killing of the men she knew, the death of her youngest brother, etc.  But her brother Peter shows up at the beginning of the book to bring her back to Prince Nicholas's kingdom. There is a war coming, and they need her skills and talents to help train their army that has only known times of peace.  Peter has been put in charge of the army, and he wants Arianna to help.  When she arrives back, she is nervous to see Nicky at first.  You see, they had that one night together.  But she knows it is probably not meant to be more.  And she is proven right when the Prince's parents, the King and Queen, tell him a marriage has been arranged for him, to Princess Merriam.  Yet there is the Prince's friend, Zachary.  There is something about him, Arianna knows he's had a life with many setbacks like her own, and not only that, she can see things in him that are the same in her.  When someone in the kingdom is killed, war will truly start, and Arianna must help figure out how to win.  She will call on the gypsies for help, for what help they might be willing and able to give. There will be betrayal, but it will be someone that had sent up bad warnings before.  In the end, most everything will come up settled.  It's not an ending where everyone is just put into their final places, there is enough of a question about what Arianna will do next that there could be another book.  It just doesn't need to have one if not.

I did think it was a good story.  But as I've mentioned with other Self-Published books, there were many spelling errors.  Not in words spelled wrong as if someone didn't know how to spell them, just probably oversights as it was being written or typed.  I know that Michelle said she did kind of rush to get this 2nd book in the series out last year, that it could have stood another read-through, and I've offered if she needs that from now on, I'd be happy to do it.  :-)  There were a few things that did bother me about the story as well.  A lot of people said "Fair enough", a lot of times.  Enough that I noticed it.  Also, I get the wolf comparisons, and it worked for the story. But there were times that it seemed almost forced or overdone.  There were a few times a comparison was done by someone and really a wolf isn't the first animal that would have come to my mind for that action.  There's also a couple of times that Arianna pulled her sword or knife that seemed like major overkill.  I mean, as much as she loved her brothers, she would seriously pull a sword on them?  And then when someone was making a joking comment about Zachary she almost pulled  a knife on them. That was a little much for me.  But I guess that is her personality and she is so different from me, that I just must not understand doing that.

So to sum it up, a good story, with some issues that are probably mostly due to the self publishing aspect of not having the final professional edit, and a good conclusion to the first story.
Posted by Lisa Mandina at 7:00 AM